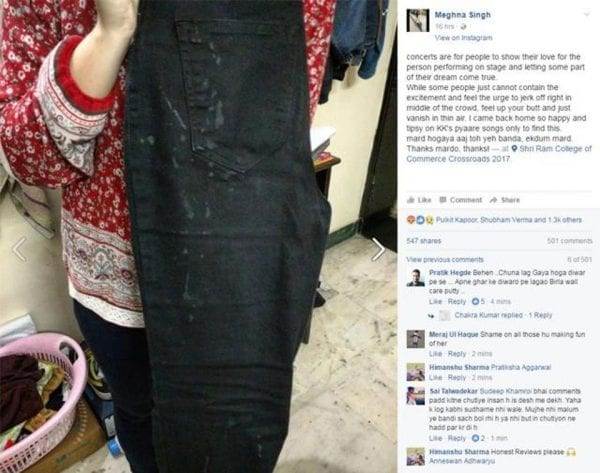 “Concerts are for people to show their love for the person performing on stage and letting some part of their dream come true.
While some people just cannot contain the excitement and feel the urge to jerk off right in middle of the crowd, feel up your butt and just vanish in thin air. I came back home so happy and tipsy on KK’s pyaare songs only to find this,
mard hogaya aaj toh yeh banda, ekdum mard.
Thanks mardo thanks!” 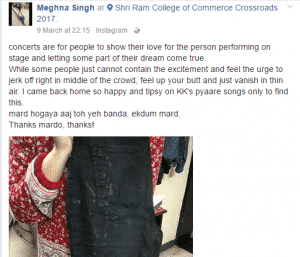 This picture of her stained jeans has sparked a comment war on social media platforms. Some people expressed outrage at such a shameless act while others are still in doubt regarding the authenticity of this incident.

People expressed the disgust and embarrassment they felt on reading about this incident. They couldn’t believe guys could stoop to such a low level. Some even recommended relieving the guy of his male organ to teach him a lesson.

One of the commenters believed it to be prank. He didn’t doubt Meghna but believes that she was pranked by someone into believing something that isn’t real.

Some guys could even find humor in this act who commented that this is just spilling of buttermilk or as you commonly say ‘lassi’.

People also doubted the whole post because of the amount of liquid spilled or semen patches on the denim.

They believed their comment to be funny when they added that it might be the guy’s way of coloring her for holi when he couldn’t find anything else. Really guys!!Was this supposed to be funny?

Many girls and guys supported her for trying to expose such an act of savagery while some called it a mere publicity stunt.

They called it a desperate attempt to fame and justified it by saying that the jeans doesn’t belong to a girl. They commented “Just look at the size of it, guys”. 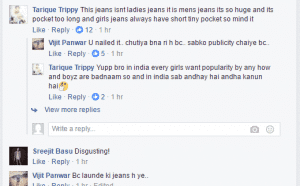 Some enthusiastic readers gave the verdict of the post being hoax, judging by her post’ text stating that guy was shorter to her and they couldn’t figure how he could jerk off so high. Additionally her suspicion due to smell made some guys comment that there is no possible way for her to smell it among the big crowd infused with smell of smoke, sweat and more. 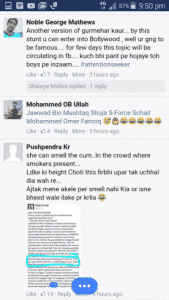 Gurmehar Khan is still not left alone as seen by this guy’s post when he compared Meghna to be another Gurmehar as in another WANNABE!

The comments on this post itself became the topic when some expressed discontent over how people commented.

Some girl called the guys perverts openly and got thrashed for it. 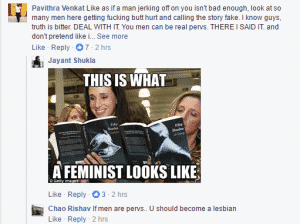 One of the futures Sherlock Holmes snooped around her pictures and found an expert comment to distinguish him from others in the comments section. 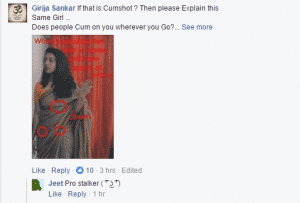 One of the guys went to the unexpected lowly limit of doubting the character of Meghna by commenting on her ability to smell semen.

The current displeasure shown on FB of girls using menstrual blood as holi colors also got dragged into this. 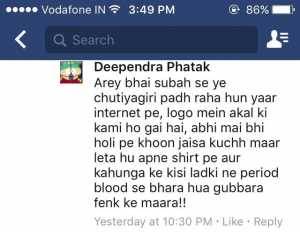 Since politics could never lag behind while a major debate is going on, AAP and Delhi politics was sure to pop up somewhere. 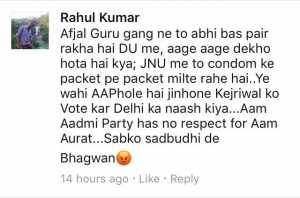 Some continues to wonder if it was a reality, what Meghna thought she would gain by posting it on Facebook instead of responding to it at the time of the incident. 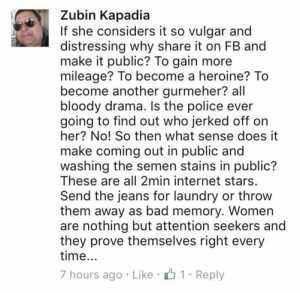 As the great minds put their instincts and scientific knowledge to use, figuring out whether those patches are semen or not , whether it was a mere publicity stunt or an act of shamelessness, I can’t spun my head around the extremities of public opinion thrown around by these people on social media platforms.