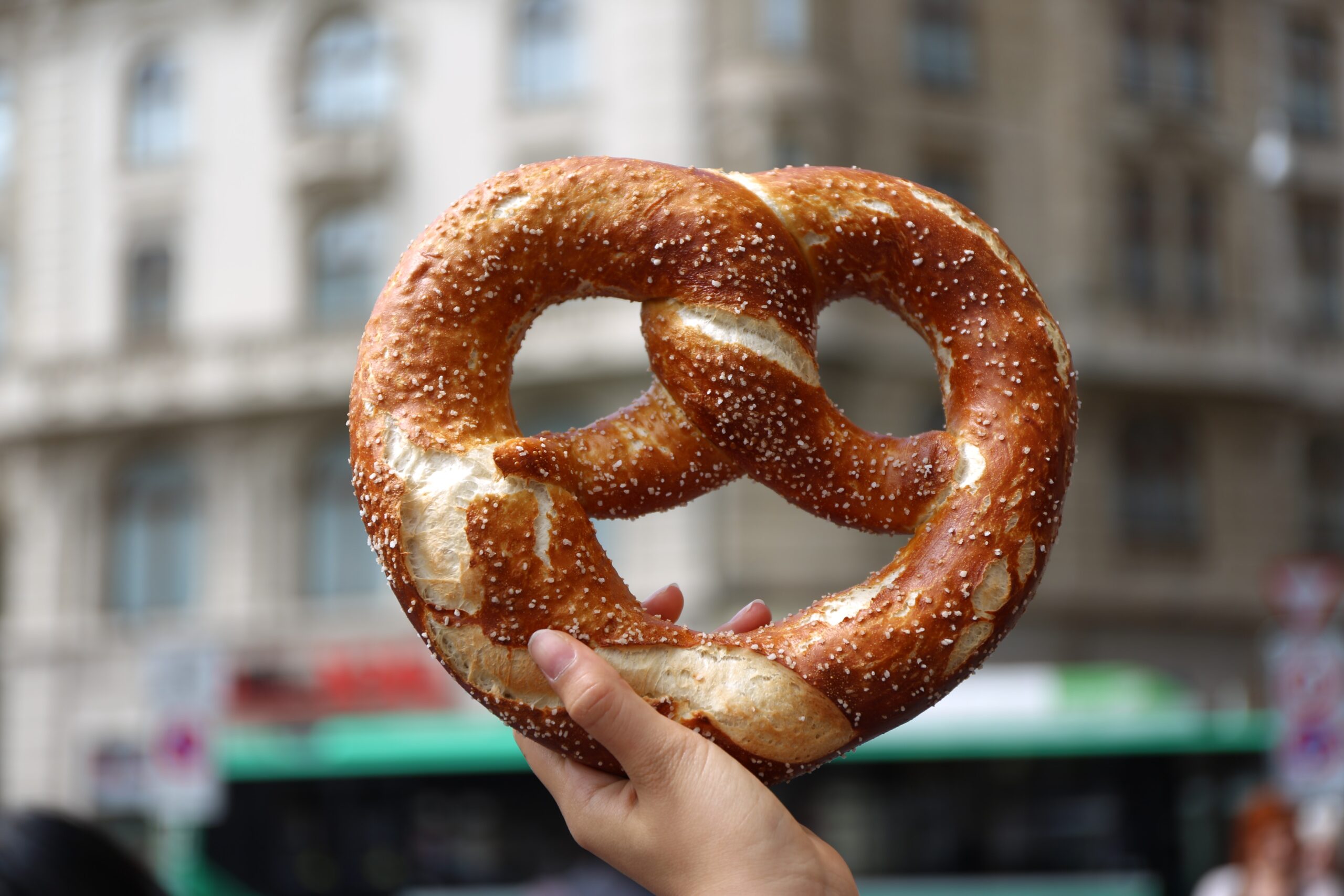 Germantown Pretzel Festival is your one-stop destination if you want to enjoy a food festival, live music, and a walk around the historic town. Germantown, situated in Ohio, is known for having a rich history, amazing people, and a love for good pretzels. The people of the town have been hosting this festival every year, for the last four decades.

Ohio has fascinating vacation spots, attractive tourist attractions, beautiful scenery, and amusing festivals. One of the festivals that you should visit is the Germantown Pretzel Festival. The festival is full of food vendors, craft booths, live music, and fair rides.

But the most important reason this festival is so popular among locals and travelers is the ton of pretzel items and variations of pretzels that you can enjoy. You can grab a pretzel sandwich or giant pretzel bread while exploring the city. The city itself is a beautiful place you should travel to. It has historical relics and sites to explore. Vendors also sell hand-crafted items, tasty treats, and other things.

So let us get into the history behind the Germantown Pretzel Festival, what you can do, places you can visit, and why you should definitely attend the festival. 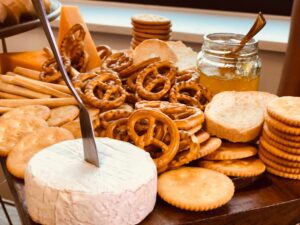 What is a Pretzel?

We all know by now that the Germantown Pretzel Festival is known for its various pretzel related items. Now we will learn more about the pretzel, which is considered an iconic bakery item. Pretzel is said to be the oldest snack ever to exist.

The origin of the bakery item has been discussed for a long time. According to some legends, pretzels were first made in 610 AD by a monk who lived in either Nothern Italy or Southern France. He made the snack for children to award them for learning their prayers. He used the leftover dough and shaped it into a knot that resembled a child’s arms folded for prayer and called the snack petiole.

There is another origin story in Germany that bakers invented the pretzels out of desperation when local gang members took them hostage. Whatever the origin story is, the pretzel started to spread from Germany to other countries. The pretzel was now seen as an easy snack: something you can eat when eggs and milk are scarce.

The pretzel has been used as an emblem since the 12th century. The pretzel emblem is used for many bakeries and bakers’ guilds in Southern Germany. 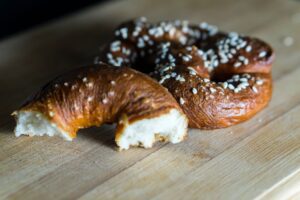 Pretzel came to North America during the late 18th century. They were brought by immigrants from Southern Germany and Switzerland who moved to Pennsylvania and opened bakeries. These bakeries would sell handmade soft pretzels.

Soon pretzels became a popular snack in America. The Soft Pretzel made its way to New York, Philadelphia, and Chicago. As the industrial revolution came, machines were invented to mass-produce pretzels for the public.

A traditional pretzel is a baked pastry made from flour, yeast, vegetable oil, and other flavorings like salt and sugar. The dough is then rolled to be cylindrical in shape, imitating a strip. The ends of the strip are then taken and twisted within themselves to mimic a knot shape.

The pretzel is then treated with sodium hydroxide mixed in hot water. This process helps the pretzels to have a brown colored surface. It is then baked according to what kind of pretzel you want to make. There are mainly two types of pretzels: Soft pretzel and Hard pretzel. Soft Pretzels need to be consumed within a few hours after making. Hard pretzels have a longer shelf life and can be eaten within a few months. 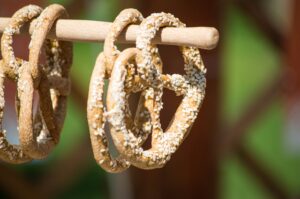 History of the Pretzel Festival

Before we get into the story behind the Germantown Pretzel Festival, we will look into the brief history of the town that organizes the festival.

The famous historic By-Jo theater was constructed here. From silent films that required a piano for the background musicc, to the modern-day movies and blockbusters, the By-Jo theater screened all these throughout its existence.

Germantown also has a unique covered bridge which was built in 1870. Its architectural construct is similar to that of a suspension bridge, that is the covered bridge is made from an inverted bowstring truss.

Homer Ken, known for making concrete statues of lions, gave his last concrete lion creation to Germantown after he retired. You visit the sculpture while you enjoy the Germantown Pretzel Festival.

Germantown Pretzel Festival has been organized by the locals for the last forty years. The first one took place in 1980 with the support of residents and organizations. The festival was organized to raised funds for local shops and other neighbourhood purposes. 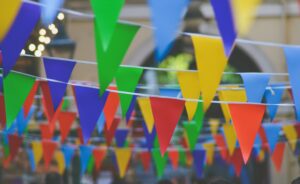 Now, after all these years, Germantown Pretzel Festival lives up to its name, as pretzels play an essential part in the festival. The festival now takes place at the Germantown Veterans Memorial park, near Warren Street. There are booths for local shops, businesses, and pretzels.

You can find many food items and various types of soft pretzels to eat and enjoy. They also have a stage at the Germantown veterans’ park where bands play music and perform other acts for the audience. Different shows also take place, which you can find in the timetable of the shows. 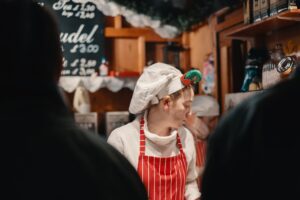 Things to Do at the Festival

The main star of the Germantown Pretzel Festival is none other than pretzels. You can find sweet and savoury pretzels that are soft, gooey, and will melt in your mouth after you take a bite into them. Simultaneously, there are the classic pretzel toppings like butter, salt, and sesame seeds.

You also try unconventional toppings like sour cream, jalapenos, tomato sauce, cheese, and pepperoni. If you are a sweet tooth, you should not miss out on pretzels with sweet cream cheese, cinnamon powder, and sugar. You can also find pizza-flavoured pretzels too. You can snack on mini-sized pretzels, stick pretzels, or any other shaped pretzels. You also need to try big giant pretzels too!

Some of the food vendors also sell common fair food like funnel cakes, sandwiches, and brownies. But there is a twist in these classics! For example, funnel cakes and brownies are topped with crunchy pretzels. Pretzel sandwiches are sold, which replace a sandwich or burger bun with a pretzel bun. You can also try cheese-stuffed or chocolate-filled pretzels.

Some vendors sell packets of crunchy and soft pretzels. Visitors can also buy pretzel buns for their home too. You can buy pretzel themed t-shirts and other merchandise as well. Other food items that you can eat are pork chops, Cajun fries and other Cajun topped items, BBQ chicken and ribs, and more fair food.

While we talked about the food scene of the Germantown Pretzel Festival, there are more things to enjoy the festival. There is live music by popular local and indie bands to which you can dance and sing along. The vendors have hand-crafted goods like hats, pirate props, and decorations for autumn festivals like Halloween and Thanksgiving.

You can even buy winter clothing items like coats and sweaters too. Graphic t-shirts are also sold, which make a good Christmas gift for the kids of your family. If you have kids accompanying you, there are rides for them. They can enjoy amusement rides like toy-train, merry-go-round, and others.

While you are at the Germantown Pretzel Festival, do not forget to take a walk around Germantown Veterans Park and the town itself. You will get to see various historic relics and places, due to which the town has such a beautiful cultural and historical background. 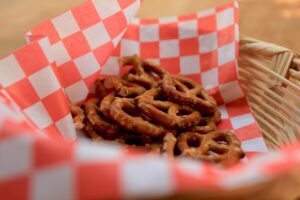 The Germantown Pretzel Festival is one of the most popular autumn festivals that Ohio celebrates. The festival is a chance to appreciate and celebrate the German culture that was brought by German immigrants, the history of the town, and the iconic food item: pretzels. You should definitely check out this great event, snack on some pretzel items, and take some back to home too!