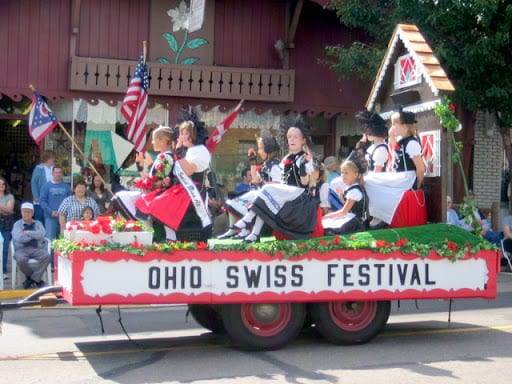 Contents
Ohio Swiss Festival: 10 Facts You Should Know!1. Ohio Swiss Festival appears like a ‘Mini Switzerland’!2. Ohio Swiss Festival is celebrated by the Swiss Migrants.3. The Festival was initiated to promote their cheese-making skills and culture.4. Not the Biggest, but one of the best Festivals of Ohio!5. Sugarcreek is the cheese producing factory!6. Festival means competition!7. The competition is held thrice a year!8. There’s an auction for the winner’s cheese!9. Cheese is served in 3 ways!10. The list of events is quite long and engaging!

Ohio is a beautiful state located in the midwestern region of the United States. It is one of the largest states of America area-wise, and even it stands on the tenth position when it comes to the population.

Ohio has a rich history and culture; it has a long list of wars and historical events that occurred here during the last few centuries. You can witness a mixed kind of community here, and as people from diverse ethnicity and backgrounds of the world have settled in Ohio. Still, the significant population consists of the Americans only.

The festival appears like a mini Switzerland because the origin of this festival was started by the people who migrated to Ohio from Switzerland. Along with them, they brought their delicious food and beautiful culture.

The event is decorated in such a way that it reminds of the small beautiful villages that can be seen in the different parts of Switzerland. You can easily spot some Swiss flags, Alpine-style buildings with a stunning facade. There is a parade organized here which has a huge wooden cuckoo clock which rings after every half an hour.

2. Ohio Swiss Festival is celebrated by the Swiss Migrants.

After traveling through different places, the Swiss migrants came to Ohio leaving their homes and the beautiful villages of Switzerland during the early years of the 1800s. The migrating families found Sugarcreek in Ohio, which has rolling terrain, and that reminded them of their villages, which looked quite similar, so they decided to settle here.

It is said that the region was full of dairy farmers, and they had an abundance of milk. The swiss migrants knew making cheese, and it was a useful skill because it helped the dairy farmers reduce the wastage of milk because of its sourness.

3. The Festival was initiated to promote their cheese-making skills and culture.

It is said that the people who are involved in the organization of this fun festival are the descendants of those Swiss migrants who came and settled in Sugarcreek, Ohio. They have a generation of experience in making traditional cheese, which is loved by the locals now.

The Ohio Swiss festival became popular when the local dairy farmers and cheesemakers came together to promote, display, and reach out to more people to show their cheese-making skills. The festival brings all the cheesemakers and cheese lovers together at a place and makes it a successful and fun event.

4. Not the Biggest, but one of the best Festivals of Ohio!

The Ohio Swiss festival is not celebrated on an immense scale, but it is one of the best festivals you can witness in the Sugarcreek. The festival has a wide range of cheese types, wines, and interesting events that are just amazing to watch.

You can always see people enjoying and laughing because cheese doesn’t make anyone sad, plus the parade is an excellent opportunity of exploring the Swiss culture. You can see people from the age group enjoying here. It is not the biggest but one of the most quaint and unique festivals in the world.

5. Sugarcreek is the cheese producing factory!

As mentioned earlier, Sugarcreek is one of those places where lots of dairy farmers had resided for over two centuries. And there was a surplus of milk, which always got wasted because of lesser demand, and hence the Swiss cheesemakers came in the picture.

The Swiss migrants used their traditional method of making cheese, which required sour milk, and that helped the dairy farmers in reducing wastage. Today Sugarcreek is known for its best locally produced cheese and people are a fan of their variety, taste, and texture.

The Ohio Swiss Festival features some of the greatest cheese the local has learned from their ancestors. But the festival is not about just tasting and enjoyment. It is about intense competition. It is said that the Swiss Festival was organized and founded five years later.

The competition between the top cheesemakers of the region started five years earlier than it took the form of a festival. Earlier, the festival was held annually and was not endorsed or co-sponsored by any other event organizers.

7. The competition is held thrice a year!

After several decades of cheese-making, finally, in the year 1952, the Swiss Festival was officially initiated by the support of people of Sugarcreek and the Ohio’s events organizers. The competition among the top cheesemakers of the region is the oldest tradition of this festival that happened once a year previously.

Later the competition started happening thrice a year. The cheeses are judged three times in a year, and scores are given to all the participants in each contest. The Scores are then combined, and the grand finale happens during the Ohio Swiss Festival, where the Grand champions name is announced.

8. There’s an auction for the winner’s cheese!

The fun of the festival doesn’t end with the announcement of the winners. There’s more to see now.  The winner of the year doesn’t just get recognition or prize; the people of Ohio have come up with this unique idea of auctioning off the winner’s cheese.

The cheese is auctioned, and the highest bidder gets all the cheese to himself. Even the smaller shop owners are welcome to participate in the auction. But if you are wondering about purchasing smaller portions of cheese, you don’t need to worry; the smaller portions are also available at the fire station.

You are visiting the great Ohio Swiss Festival, and hence you are getting a great opportunity of tasting Swiss cheese. But here, the cheese is offered in different forms. It is said that the swiss cheese is served in three ways.

You will get cheese on sticks, which is the first form. The cheese is fried till they get golden brown and then offered on the sticks just like a corndog. In the next form, you will get to taste the Swiss cheese with wine, which is a must-try combination.

The top 10 wineries and cheese makers sample their products and wait for the results. The third way you will get to taste cheese is through the Swiss cheese sandwich.

10. The list of events is quite long and engaging!

The Ohio Swiss Festival won’t only entice you with their excellent Swiss cheese, Craft Beer, and wines, but a grand parade and events are also a part of this festival, which attracts lots of people who just want to have a fun day.

You can witness Kids Parade, Grand Parade, cheese chase, Big Wheel Race, Cheese eating competition, and Steinstossen at the Ohio Swiss Festival. Among them, a few are competitions, and some are races. People from the age group can participate in the races and other events whichever suits their needs.

In lump-sum, it can be said that there’s nothing that is not fun to watch or participate in. The parades are often very grand and impressive, as you can see people dressed up like a Swiss, and all kinds of decorations are made for making it a great success and a sight to watch.

Visiting Ohio Swiss Festival can add one of the most fun days in your life because this festival has cheese, wines, beers, and lots of entertainment. What else do you need to have a fun day?

If you get the chance of visiting Ohio, or if you are residing in the nearby states, then invite yourself over, and have a different country vibes celebration here with your friends. And while you are in Ohio, explore some fantastic places and free things to do in Columbus, Ohio. You can give a read to it here!

Do your research about the Ohio Swiss Festival before heading out, because this festival only lasts two days, and you wouldn’t want to miss that. By spending just a few bucks on the tickets, you can have access to this cheesy paradise.

This festival is a paradise for the cheese lovers, and you can visit the Ohio Swiss Festival’s official website for gaining the exact information about the event’s date and timings.

This was an article on ‘Ohio Swiss Festival: 10 Amazing Facts to Know!’ if you have anything to add, please feel free to share your thoughts with us!