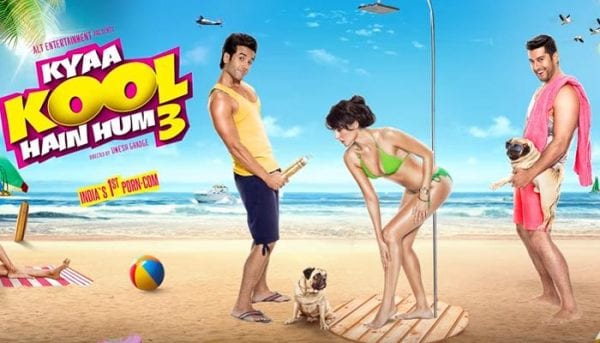 The title makes you understand why commas are utterly important and are, almost, never used.

After we have taught you the grammar lesson, let’s move on to the Hindi Translation of the title because that’s what we’re talking about (I’m hoping you weren’t dumb enough to not get it at your first attempt, but let’s give you all a little benefit of doubt).

Now that we have established that we are indeed talking about “KYA KOOL HAI HUM 3” the third installment of the movie series, you never wanted a second part of in the first place, let’s get to it!

Good news is: The Mandana Karimi you found on Bigg Boss, is a part of this movie (If you don’t watch Bigg Boss, I love you already. Don’t get attached.)

Bad news: Tusshar Kapoor and Aftab Shivdasani are also in the movie, and they are acting (As I’ve been told).

The news that makes you want to kill yourself news: The poster and trailer of the movie which claim that this is a “Porn-Com”. You read that right! Porn-Com. Like there weren’t enough of these in the 90s already! (with the innuendos, of course)

If you still haven’t had enough brain farts already, I beg you to watch the trailer. I really, really am.

I feel so diabolic right now, I can’t even. You fell for that? That!! Don’t you already know that it sucks more than those “actresses” pretend to? In the movie!

Since I’m being an evil pain in the ass kind of individual right now and you have been smart enough to dodge that trailer, here are a few masterpieces from the same.

The movie, obviously, has an A certificate, and would, obviously, be passed with no cuts whatsoever, but look at Angry Indian Goddesses! Shame Shame! How could he make a film like that and let it win so many awards! Chi chi! Look at Tusshar Beta. With an extra s, he’s extra sanskaari.

The extra sanskaar will be written all over the film, making us wonder why we are still unable to change the face of Indian Cinema. We still dance when a girl does in skimpy clothes, when there is random shit presented to us in the name of comedy when there is no story, no line and yes, no sense.

Let us all enjoy every bit of these films, because that’s exactly what we deserve. Truth is to see for yourself, it should never be projected on a screen.