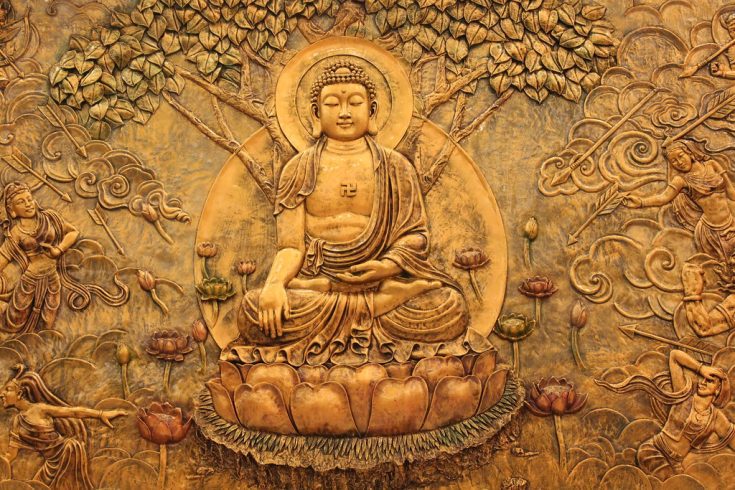 How To Become a Buddhist? Buddhism can be very compelling, and many of you want to understand its vastness and deep Spiritual teachings. For that, you should have a good idea of what Buddhism is. Let’s have a look at it.

It is one of the oldest ” Faith/Religions” on the planet. Due to its wholesome and ancient origin, it can be very magnetic for people interested in ancient civilizations and their spiritual ways.

It can be alluring for those who don’t want to bind themselves in ” Belief Systems.” Gautam Buddha himself rejected the Vedas.  He is famously known as ” The Buddha,” who founded Buddhism.

If this Faith/Religion fascinates you and you want to know how to become a Buddhist and want to know its Tranquility, then we’ve got 12 ways to help you comprehend Buddhism and fathom it in its true Essence.

Here Are 12 Ways on How To Become a Buddhist

Understanding Your Need To Become a Buddhist

Buddhism is very different from various other faiths in terms of practice. For understanding Buddhism, you need to understand why you or other people want to become a Buddhist. Abrahamic faiths are generally considered very stringent or very devotional in their approach. In contrast, a religion like Buddhism focuses on the different ways one can transcend his/her spiritual goals like ” Nirvana. ”

Buddhism isn’t based on strict devotion or bhakti, and it can be a great option for those who want a more pragmatic approach towards spirituality.

If you want to understand how to become a Buddhist, it is pivotal to understand its history. Siddhartha Gautama laid the stepping stones of Buddhism in the 6th-century BCE. Buddhism flourished in the northeastern part of India.

Buddhism was at its full bloom in the Mauryan empire under the emperor ” Ashoka, “as Buddhism gained royalty.

Ashoka was in deep remorse after the war of Kalinga and decided to follow Buddhism for its non-violent and peaceful ways. He also supported Brahmanism and Jainism.

Buddhism spread in central Asia, especially in China, through the silk road route. Buddhism Through The Silk Road.

Learning About Siddhartha Gautama ” The Buddha “

Buddhism and comprehending how one can understand how to become a Buddhist; one has to learn and analyze the life of Siddhartha Gautama. Even though Buddhism takes different forms and colors, you can never miss its essence if one understands the Buddha’s life story. Check out some great books on Siddhartha Gautama to understand his personality in full essence.

Siddhartha was born in a family of riches and privilege. He belonged to the Shakya clan, and his father was the head of the Shakya clan. It is said that when he was born, a prophecy was done suggesting that he may become a great sage or a great king. To stop his son from becoming an ascetic, he prevented Gautama from suffering and the reality of the world.

Even though his father tried his best, Gautama was stubborn and found his way into the world, and his senses could not fathom the suffering he saw. He then became an Ascetic and established Buddhism through his followers.

Learn The Basic Terminologies of Buddhism

Ascetic – a person who detaches himself/herself from desires in pursuit of spiritual awakening.

Bodhisattva – a person who eschews himself/herself from enlightenment until other people are enlightened.

Sunyata – nothing has any real permanent existence.

Anicca – things keep changing, and nothing stays the same.

Anatta – the philosophy that the soul changes.

Nirvana – the final goal of Buddhism, free from suffering, karma, and the life cycle.

Samsara – the cycle of birth and re-birth.

Dhamma is the teaching of Gautam Buddha, which involves various methods and ways to conduct life. Dhamma comes from the language pali.

Dhamma in other languages, especially Indian languages, takes different forms, but the essence is the same. Dhamma loosely translates as the Duty in English. In Sanskrit, Dhamma is known as Dharma. One should know what Dhamma is to understand better how to become a Buddhist.

As the pious scripture Bhagwat Gita talks about in detail, this word has a very imperative significance in Hinduism. Surprisingly Hinduism and Buddhism share a common ancestry, and their teachings have noticeable similarities.

Buddha attained enlightenment under the Bodhi tree. During his meditation, He understood the four noble truths, which are very important to understand for someone who wants to become a Buddhist.

These noble truths are pragmatic approaches towards our daily conduct of life, which can help someone in his/her spiritual journey. Like the Buddha himself says – “I teach suffering, its origin, cessation, and path. That’s all I teach” – buddha.

The ceasing of dukkha comes from eschewing desire – Elimination of dukkha is pivotal to reach nirvana, and for that, Buddhism focuses on refraining itself from all kinds of desires.

The path which ends dukkha – A path that leads towards the end of dukkha is known as Noble Eightfold Path.

The noble eightfold path is the path to Nirvana ( enlightenment ). The stepping stone towards an ideal life, a life of noble ways and methods. These methods are very pivotal to understand how to become a Buddhist.

3) Samma vaca ( right speech ) – abstaining oneself from verbal misconduct such as lying.

4) Samma karma ( right action ) – ” action speaks louder than words ” is the right phrase for this as Buddhism gives high importance to right action. Abstaining oneself from sexual misconduct, killing, and stealing.

5)  Samma ajiva ( righteous livelihood ) – in no way can Buddhist harm directly or indirectly to others by taking part in any hideous activity.

7) Samma sati ( right mindfulness ) – people nowadays complain about ” reaction ” without being conscious of it. Buddhism gives heavy importance towards being mindful or being ” conscious ” about everything we do.

8) Samma samadhi ( right concentration ) – the right way to concentrate and look at life.

“Our Karma determines what we deserve and what we can assimilate.” ― Swami Vivekananda

and have my actions as my arbitrator. Whatever I do, for good or evil, to that will I fall heir…

If we prudently see, then there are Nuances in both of these quotes. One comes from a great Hindu Spiritual yogi and the other from the Buddha itself. Karma can be very confusing for western faiths, but it only subtle differences in the Eastern faiths.

In Buddhism, Karma refers to the action we perform “ Intentionally,” and based on these actions, we take Re-Birth ( Samsara ). Samsara is a cycle of Birth and Death repeating itself until the person realizes its true nature and attains Nirvana. In other Eastern faiths, Samsara also exists and in Hinduism holds great Importance.

Every faith has spiritual texts, and these texts are important to understand the nuances of the given faith. Though Buddhism and Hindusim are based on Practices rather than mythology, the context of those practices is understood through the scriptures.

The most sacred scriptures in Buddhism are the ones that are to be believed to have come out directly from the mouth of Buddha. These are known as Buddhavacana ( word of Buddha )

Some examples of Buddhist texts are Abhidharma texts, Theravāda texts, and Mahāyāna texts.

In the given map above, we all can see how Buddhism spread to different countries and because Buddhism is a very ancient religion, it has taken different forms and colors. There are mainly three schools of Buddhism:

Vajrayana – Primarily practiced in Tibet, this school of thought emphasizes Rituals and Tantra practices. This is believed that these practices help a person gain momentum in his or her journey towards Nirvana.

Mahayana – Mahayana practitioners believe in staying in the cycle of Birth and Death ( samsara ) because of solicitude for others. This stage is known as Bodhisattva, as explained in the upper section.

Theravada – This is the only earliest school of Buddhism that has survived until this date and is based on the earliest Buddhist texts, which are considered Buddha’s word. These focus more on one’s Liberation.

Buddhism is Neither Polytheistic Nor Monotheistic

Many Western people may confuse Buddhism with Monotheism, but in reality, it is neither Monotheistic nor Polytheistic. There aren’t multiple personal deities, neither a Monotheistic creator god-like in Christianity, Judaism and Islam.

As already mentioned in the above sections that Buddhism is more about personal discipline and various practices. It’s not about devotion or workship, and it is about one’s liberation. Surely there are sects in Buddhism which are ritualistic, but they are the product of the various amalgamation of different cultures.

Accept Buddhism as a Way of Life

Buddha himself Meditated during his period under the Bodhi Tree. If you want to understand how to become a Buddhist, you have to treat Buddhism as a way of life rather than just another part.

Buddhism is not about prayers and devotional hymns, but it is about “your inner well-being.” One who treats Buddhism in this way will surely attain Nirvana.