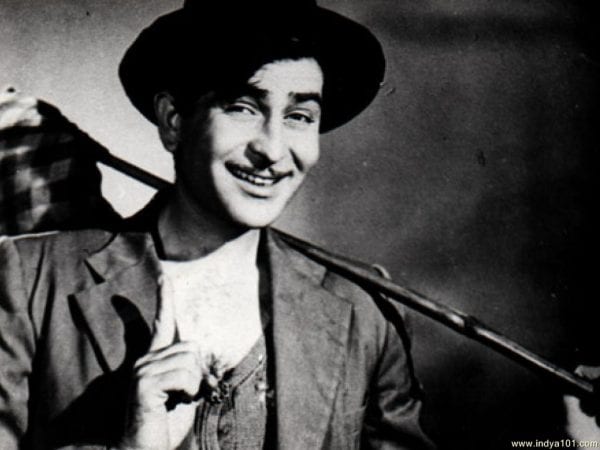 The Kapoors– A name synonymous with Bollywood Royalty. They have, over the years, produced generations of bona fide stars, right up to the present day talents of Ranbir and Kareena Kapoor. It’s easy to forget sometimes the beginning of the Kapoors, actors who began their careers when acting wasn’t necessarily the most respectable job and when India was wrought with political and religious turmoil. And this was when the world was introduced to 10-year-old Raj Kapoor. Raj Kapoor, perhaps one of the most well-known patriarchs of the Kapoor clan. Born in 1924, Kapoor made his acting debut in the movie ‘Inquilab’. He then went on to get his big break in the film, ‘Neel Kamal’ (1947) opposite Madhubala in her first role as the leading lady- newbies debuting together? Well, that’s something that obviously remains vastly popular in the film industry even today.

In fact, Ranbir Kapoor, it seems, took inspiration from his predecessor in Saawariya with his stunning debut (and towel drop). Honestly, who can forget that towel drop!

Which brings us to the first of many trends Raj Kapoor started. He was the first star to have the courage to debut with a newbie, something that he continued with his son Rishi by making him debut with ‘Bobby’, opposite debutant Dimple Kapadia. Since then, since Raj Kapoor’s brilliant success as debutant acting opposite a debutant, Bollywood stopped shying away from putting up big productions starring only debutants, which is clearly, a good thing for many of the thousands hoping to make it to the Indian big screen. At the age of 24, Raj Kapoor started his production studio, R.K. Films, making him the youngest director of his time with his directorial debut in Aag, with co-star Nargis. And so, with this first film, Raj Kapoor created a mystique that went on to surround Bollywood’s most famous on-screen couple. Aag was also among the first films to explore the duality of inner and outer beauty, a theme that seemed to fascinate Raj Kapoor and had him re-exploring it with Satyam Shivam Sundaram. This duality, it seems, went on to fascinate the rest of the nation as well, what with films like Kahaani, where one explores the deception of appearances, going on to be made. Well, the credit of that goes to the 1951 Awaara, a film that had his fame crossing Indian borders to Russia and China. He adopted a Charlie Chaplin-esque persona as his protagonist was shaped by his circumstances and not his birth. His mannerism, the existence of a social message, everything was reminiscent of Charlie Chaplin’s on-screen charm. The movie went on to get the nation extremely aware of the beautiful cinematography of Charlie Chaplin, something that went on to inspire his great grandson Ranbir Kapoor in the charming Barfi. A trend started by Raj Kapoor went on to influence Bollywood more than 50 years later!

And finally, my favourite Raj Kapoor trend- his focus on his female protagonists. The damn of the 70s saw him making films that focused on the female lead, something that hadn’t really been done before in Bollywood. I’ll let you in on a little secret here- I’m an unashamed feminist. And anything that even mildly has the woman asserting herself and making her presence felt has me sold.  He produced and directed films like Satyam Shivam Sundaram (1978) with Zeenat Aman, Prem Rog (1982) with Padmini Kolhapure and Ram Teri Ganga Maili (1985) which introduced Mandakini. Satyam Shivam Sundaram broke conventional norms by having a scarred female protagonist, making women more than just pretty accessories on screen. He made them human. And nothing I think warrants a celebration more than that. So this year, let’s celebrate the life of one of Bollywood’s most legendary men, of a man who lived through and brought on multiple eras in Bollywood, a man so pragmatic that he realized the worth of his female protagonists before the West even caught on. Let’s celebrate Raj Kapoor- Actor, Director, Thinker, Artist, and yes, as how I see it, a Feminist.