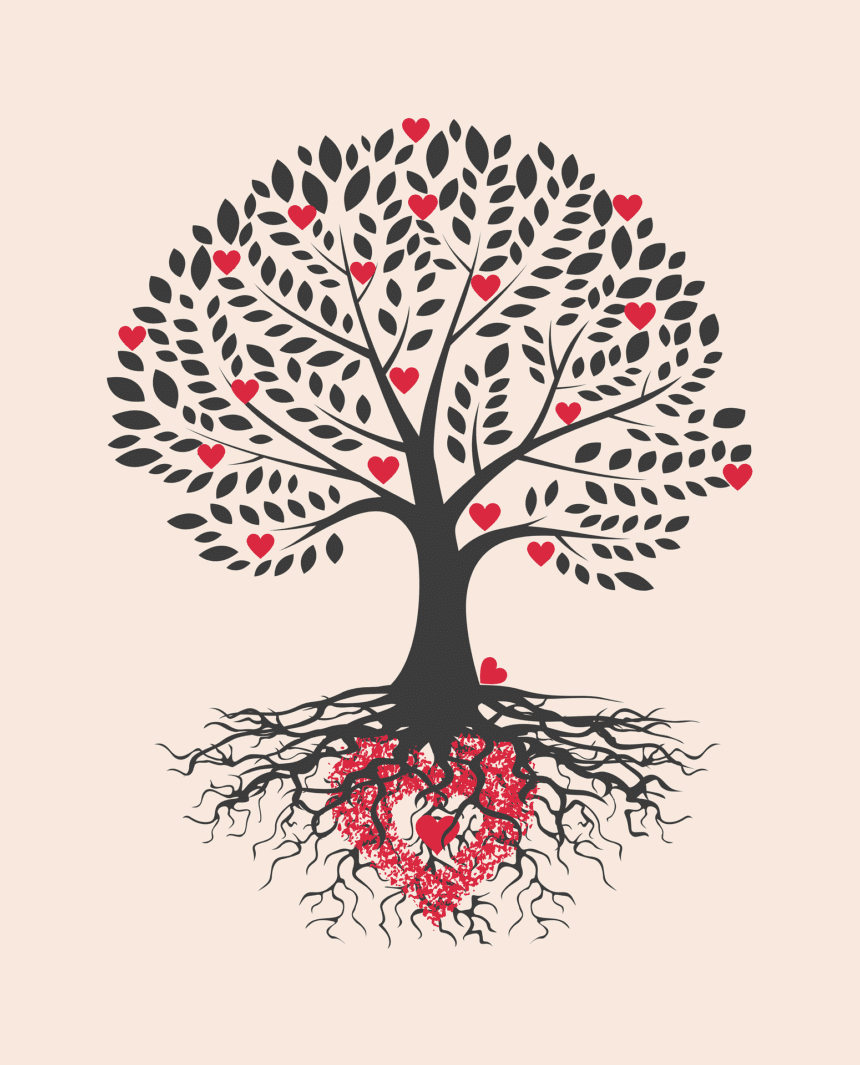 What is the Tree of Life? The Tree of Life is a prominent and ubiquitous symbol that signifies a variety of concepts in numerous cultures and religions. The emblem is not culturally specific, as it has been used worldwide for ages.

The tree is considered a sacred symbol with important connotations in religious and spiritual ideologies. While the Tree of Life represents many distinct things, there are some universal aspects that the emblem reflects across cultures.

The tree of life notion may have originated in Central Asia and been adopted by different civilizations, such as Scandinavian mythology and Altai shamanism.

What is the Tree of Life? The Tree of Life is a popular symbol of the interdependence of everything in the universe. It represents oneness and is a reminder that you are never alone or secluded but rather connected to the rest of the world.

The Tree of Life’s roots go deep into the earth, accepting nutrition from Mother Earth, and its branches reach into the sky, accepting the energy from the sun and moon.

The Tree of Life has been a symbol since the beginning of time. The earliest known instance, which dates to around 7000 BC, was discovered in the Domuztepe discoveries in Turkey. From there, the symbol is thought to have propagated in some ways.

A comparable representation of the tree from the Acadians, dating from 3000 BC, has also been found. Since a pine tree never dies, the symbols are thought to be the first representations of the Tree of Life. The symbols were made to look like a pine trees.

The ancient Celts also attached great importance to the Tree of Life. It had significance in Celtic culture and stood for balance and harmony.

When they cleaned their fields because they thought it had magical qualities, they would leave one tree standing in the center. It was a very significant crime to take down this tree since it was where they would conduct their big gatherings.

The Tree of Life appears in a variety of mythology from many cultures. The emblem has been mentioned in several ancient cultures, including Urartu, Mesopotamia, Iran, and Egypt. It is challenging to identify the symbol’s precise beginnings and how it traveled worldwide because it was well-known and widely utilized in ancient societies.

A collection of nodes and intersecting lines served as a visual representation of the Assyrian tree of life. It appears to have been a significant religious icon frequently cared for in Assyrian palace reliefs by humans, eagle-headed heavenly genies, or the King and blessed or impregnated with bucket and cone.

There is disagreement among Assyriologists over the significance of this emblem. Modern scholarship has given it the moniker “Tree of Life”; however, the Assyrian texts do not use it. In actuality, there is no recognized literary evidence for the symbol.

The search for immortality is depicted in The Epic of Gilgamesh. In the mythology of Mesopotamia, Etana looks for a “plant of birth” to give birth to a son. This has a strong historical precedent because it was discovered in Akkadian cylinder seals (2390–2249 BCE).

Amesha Spenta Amordad, Gaokerena, a tree whose viability would attest to the extension of life in the universe, Bas tokamak, Mashya and Mashyane, Barsom, Haoma, and other sacred vegetal icons are just a few examples of the many sacred vegetal icons related to life, eternality, and healing in Avestan literature and Iranian mythology.

In Genesis 2:9 and 3:22–24, the tree of life is mentioned as the source of eternal life in the Garden of Eden, but after man is driven out of the garden, he no longer has access to it. It subsequently reappears in the final book of the Bible, the Book of Revelation, most notably in the book’s final chapter (Chapter 22), as an element of the rebuilt garden of paradise.

Access is no longer restricted because those who “wash their robes have the right to the tree of life.” A similar remark exists in Rev 2:7 when the tree of life is assured as a prize for those who overcome. The “pure river of the water of life,” which “flows out of the throne of God,” is mentioned in the opening of Revelation 22.

The river appears to nourish two trees of life, one “on either side of the river” that “yield twelve kinds of fruits” and “their leaves were for the healing of the nations.” Or, as John 15:1 could imply, this could mean that the tree of life is a vine that spreads across the river.

The tree of life represents God’s love in Eastern Christianity.

The Book of Mormon describes and discusses the Tree of Life vision. The vision was reportedly given to the prophet Lehi in a dream and then to his son Nephi, who recorded it in the First Book of Nephi. The vision depicts a path leading to a tree, with the fruit of the tree indicating God’s love and an iron rod, symbolizing God’s message, along the path so that followers of Jesus Christ can hold on to the rod and avoid wandering off the path into holes or waterways symbolizing sin’s ways. The vision also features a vast structure in which evil insult the righteous.

Hera receives a branch of golden apples from her grandmother Gaia in Greek mythology, and she plants it in Hera’s Garden of the Hesperides. Ladon, the dragon, protects the tree(s) from those who would steal the apples.

Thanks to the three golden apples that Aphrodite gave to Hippomenes to divert Atalanta three times during their footrace, he was able to win her hand in marriage. Although it is not stated in ancient myth, many believe Aphrodite gathered the fruits from Hera’s tree(s).

In Norse religion, the tree of life is known as Yggdrasil, the world tree, a large tree (also thought to be a yew or ash tree) with a rich legend surrounding it. Accounts of Germanic tribes honoring holy trees inside their communities have persisted, possibly related to Yggdrasil.

The Quran uses the image of the tree of life as its “Tree of Immortality.” Tafsir and hadiths both mention it. In contrast to the biblical narrative, the Quran only mentions one tree in Eden—also referred to as the tree of immortality and non-decaying property—that Allah specifically banned Adam and Eve from eating.

In the Quran, a notion, idea, way of life, or rule of life is represented by a tree. A good tree symbolizes a positive notion or idea, while a poor tree symbolizes a negative concept or idea. Muslims believe that when God created Adam and Eve, he told them they could enjoy everything in the Garden except for this tree. As a result, Satan is said to have appeared to them and claimed that God forbade them from eating from that tree because if they did, they would turn into angels or start using the concept of ownership in conjunction with inheritance across generations. Iblis then persuaded Adam to believe Satan’s claim.

Other trees in heaven are also mentioned in hadiths. They realized they were naked after eating from this tree, so they started weaving leaves from the Garden together to cover themselves.

Puranas, the sacred texts of Hinduism (Santana Dharma), mention a celestial tree called Kalpavriksha. Gandharvas guard this heavenly tree in Amaravati’s garden, which is under the supervision of Indra, the King of Gods. For a long period in one narrative, gods and demi-gods are thought to be fathered by Kashyapa Prajapati and have different mothers.

After years of repeated wars between the two half-brother tribes, both resolved to churn the milky ocean to capture Amrutham and divide it equally. The Kalpavruksham and many other mythological objects emerged during the churning. It has a gold color. It has a captivating vibe. Chanting and offers can make it happy. It grants all wishes when it is pleased.

The idea of the tree of life occurs in Bahá Faith texts, where it might relate to the Manifestations of God, a great teacher who comes to humanity from generation to generation. An example of this can be seen in Bahá’u’lláh’s Hidden Words:

“Have ye forgotten that true and radiant morn, when in those hallowed and blessed surroundings ye were all gathered in My presence beneath the shade of the tree of life, which is planted in the all-glorious paradise? Awestruck ye listened as I gave utterance to these three most holy words: O friends! Prefer not your will to Mine, never desire that which I have not desired for you, and approach Me not with lifeless hearts, defiled with worldly desires and cravings. Would ye but sanctify your souls, ye would at this present hour recall that place and those surroundings, and the truth of My utterance should be made evident unto all of you.”

3. Does the Tree of Life Exist?

An ancient tree stands in the heart of the Bahrain desert, close to Djebel Dukhan (the Mountain of Smoke) and 40 kilometers from Manama. It appears to have been around for over 400 years, flourishing in a dry, desert environment devoid of vegetation.

Even yet, it continues to grow and survive, surpassing 10 meters in height, elevating the oasis where it stands to the list of the most mysterious locations on earth. The Shajarat-al-Hayat, or “tree of life,” is what the locals call the tree, and they think it was planted here in 1583 to mark the location where the original boundaries of Earthly Paradise reached.