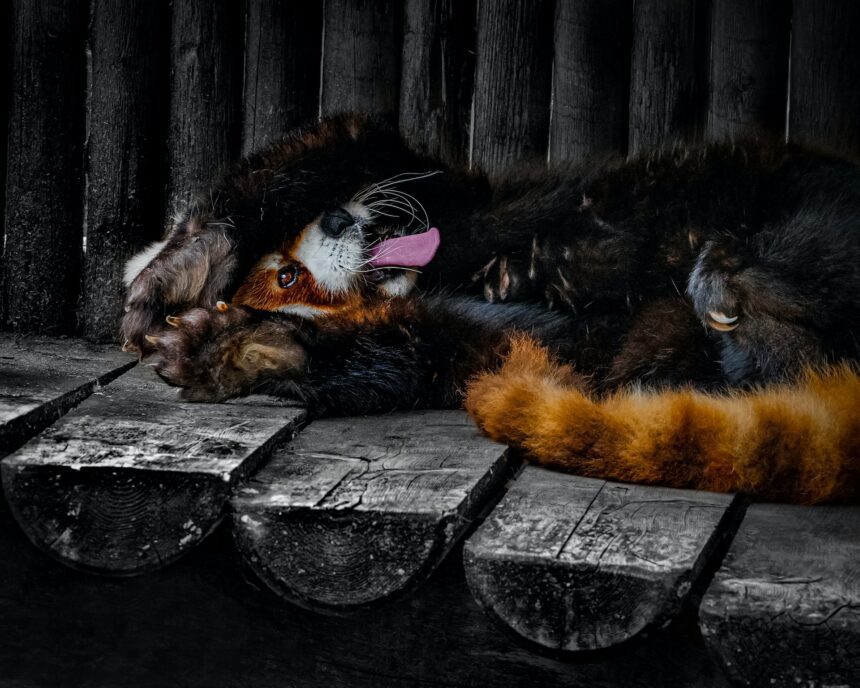 Native to the Eastern Himalayas and Eastern Asia, Red Pandas are small mammals that are sure to make their way into your heart with their adorable antics. They belong to the Animalia Kingdom and are the only members of the Ailuridae Family.

Contents
History of Red Pandas: Where were they First Recorded?Let’s Learn: 10 Adorable Red Panda Facts1. They can use Their Tails as Blankets2. They are Present on the Logo of Mozilla Firefox3. Their Sound is Known as ‘Twittering’4. They aren’t Related to Giant Pandas5. They have their own ‘Sock’6. They can Intimidate Potential Threats7. They have a Sweet Tooth8. They Love to Sleep9. They can Walk Down Head-First From Trees10. They Have an Amazing AppetiteRed Panda ConservationHow are Red Pandas Being Conserved?How can we Help?Final Thoughts

This swoon-worthy animal is famous for its acrobatic skills, small size and adorably cute face. Heartbreakingly, they are one of the most endangered species on the planet. Two species of Red Panda (one of which is the Giant Red Panda) are already known to be extinct.

Let’s have a look at their history before we move on to some interesting red panda facts.

History of Red Pandas: Where were they First Recorded?

Red Pandas were first described to be the members of the raccoon family owing to their bone and dental structures and a virtually identical feature of having a ‘masked’ face. Later, they were contradicted to belong to the Bear family; however, later genetic research distinguished them to be two unrelated animals. Red Pandas were then assigned a family of their own: Ailuridae.

The Ailuridae family seems to have emerged about 18 to 25 million years ago based on Fossil records. Apart from that, a drawing of a Red Panda was also found in a Chinese scroll belonging to the 13th century.

1. They can use Their Tails as Blankets

Yes, you read it right! One of the most adorable red panda facts is that they have their own personal blankets given by nature. Red Pandas live in the Eastern Himalayas and Eastern Asia, they face extreme weather conditions. In such conditions, they can use their tails as blankets to shield themselves from the chilly. Their long and bushy tails can be wrapped around their bodies to control the temperature.

Their tails also help them in maintaining balance, which they require since they reside in tree trunks and branches.

2. They are Present on the Logo of Mozilla Firefox

At first, it might appear to be a fox; however, it is a Red Panda on the Mozilla Firefox Logo. The name of the browser, too, seems to be taken from one of their alternative names: firefox. In some regions, they are also called the ‘Lesser Panda’ or ‘Red Cat-Bear’.

Mozilla also adopted two female Red Pandas from Knoxville zoo, Tennessee to raise awareness about their endangered status. It also branded them as ‘The Cutest Mozillians’ to honour its namesake.

3. Their Sound is Known as ‘Twittering’

Red Pandas are known to make a sound that resembles the sound of a bird, thus, known as ‘Twittering’. They are described to be rather quiet and solitary creatures. They can chirp, huff-quack or squeal under some circumstances.

4. They aren’t Related to Giant Pandas

Tracing the lineage of Red Pandas was a hard task for the scientists. While some of their physical attributes and structures resembled that of Raccoons, others, that of Pandas. It was later decided that they belonged to their own unique family, called the Ailuridae Family. This means they aren’t closely related to either of the families they were suspected to belong to! The only similarity they share with giant pandas is their choice of food: Bamboo.

Since they are exposed to freezing temperatures, Red Pandas’ bodies are adapted to safeguard them from extreme conditions. As a result, the underside of their feet is also covered with fur, giving it a sock-like feature which insulated their body in significantly cold temperatures.

6. They can Intimidate Potential Threats

Another one of the swoon-worthy red panda facts is that when they are threatened, they tend to stand on their hind legs and stretch up their claws to appear as large as possible, to intimidate the threat. This is their defensive stance. While their first reaction to a large threat is to run away from the scene to escape predators, they tend to use this stance when they feel cornered.

7. They have a Sweet Tooth

Red Panda was revealed to be the first non-primate mammal to show a liking for artificial sugar, in the most recent genetic research by Monell Center. According to the study, their tongues have unique taste receptors which allow them to enjoy the sweetness.

8. They Love to Sleep

Red Pandas are Crepuscular species. They are active during the twilight period, till the early hours of the morning. They are known to sleep for prolonged periods of time, as long as 18 hours a day.

9. They can Walk Down Head-First From Trees

One of the most surprising red panda facts is that they have very specialized extended wrist bones and sharp claws that enable them to turn their thumbs around. In this way, they can get a strong grip on trunks while they climb trees. This is one of their adaptive features which helps them to reside high up in the tree branches. This specialization also helps them to firmly grasp bamboo, their meal.

10. They Have an Amazing Appetite

Red Pandas eat mushrooms, acorns, lichens, a few insects, and a lot of bamboo plant leaves, which classifies them as carnivores. Most of their diet is bamboo leaves, of which they can eat up to 500,000 leaves per day.

The most heartbreaking of Red Panda facts is that they are enlisted as a critically endangered species as of 2008, by the International Union for Conservation of Nature (IUCN). The fact that they are not too far from extinction is even more agonizing. The estimated red panda population as of 2022 is 10,000.

The main reasons for them being critically endangered are human actions, such as Deforestation and Poaching.

Due to deforestation, red pandas who were originally meant to live in groups and mate with each other were separated. Thus, their mating antics were disturbed. This also gives rise to the problems of lesser Genetic Diversity.

Their attractive reddish-brown colored fur and ringed tail also attracted illegal poachers towards them. This included them in the illegal pet trade, which is also a major reason for them being at extremely high risk of extinction.

To raise awareness, the Red Panda Network launched International Red Panda Day in 2010, which is celebrated on September 18 every year.

According to a report, Red Pandas are under official government protection. However, they have been unable to recover from the status of being ‘critically endangered’. The reason for this was pointed out to be “poor conservation awareness and weak law enforcement”, mainly in the case of Northern Myanmar.

There are various organizations which are actively working on the conservation of Red Panda populations, such as WWF and IUCN. To revive their population, captive breeding programs are carried out.

How are Red Pandas Being Conserved?

The governments and organizations have taken some measures to conserve Red Pandas. These measures are:

How can we Help?

We can help these heartwarming creatures in the following ways:

These adorable little creatures who have a full-grown size of a housecat will never fail to make your heart swoon. Their different abilities and undeniably cute antics top the list of Red Panda Facts. So next time you come across them while they and standing on their heels and stretching up their paws, make sure to run because they are trying to threaten you!

However, their critically endangered status will not allow you to come across them so easily, making it hard for you to spot such a sight. It will be even hard for you to feed them or just admire their beauty from afar, for they are bred in captivity, all because of some humans who are ignorant of the harm they do to the environment and other co-existing species.

Therefore, it is time for us to fulfil our duties as co-existing species and help them in repopulation by any means necessary. Being bred in captivity and living in a legally-protected manner naturally affects their general antics and behaviors, which is, without a doubt not how it is meant to be. So to make them live like they want to live by the nature provided to them by the universe is the best option, for which a lot of effort is required.

We need to act now and we need to act fast since 10 years have already passed with no improvement. Let’s save these creatures and allow them to live in their suitable habitat again!

Did we miss any interesting Red Panda facts? Or do you have your own story to share? Let us know in the comment section. Let’s spread the word to spread awareness!