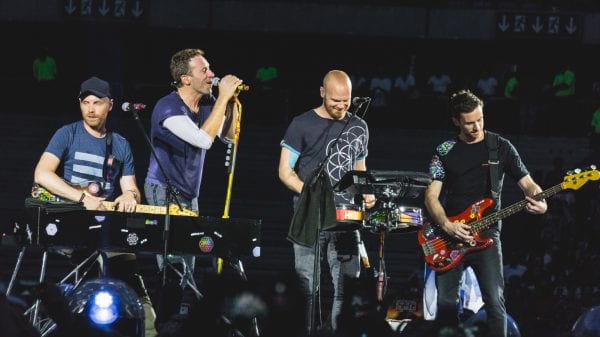 Is Coldplay the best band ever? Well, Coldplay has been one of the pioneers of rock music since the ’90s. The symphonic music and soulful lyrics are the prime reasons for the immense success of the band. It originated in the year 1996 as a British rock band.

Is Coldplay the Best Band Ever? Yellow!

Yellow is, by far, the most popular song by Coldplay. And we are sure you’d have heard it once in your lifetime. The song was serene and calming, and it was well-received by the fans. The song became so popular that it directed a lot of new audiences toward the band. People whose music preference wasn’t necessarily of the rock genre also seemed to enjoy the song quite a bit.

But, do you know the story behind this famous song? Many claim it was the fruit of love, but we are here to clear up all your misconceptions and convey the real story.

A common misconception, which circulated for quite some time, was that Chris Martin wrote the song in adoration of his ex-wife Gwyneth Paltrow. To be more specific, the title of the song had more to do with her hair color. However, this theory does not make sense because Chris and Gwyneth started dating post-2002, and the song was released in 2000. So, was the melody written for an ex-lover?

The real story might come as a shock to most of us because the song does seem like it was written out of love, but it was for no lover. It was more like the universe’s way of conspiring magic to be conveyed through the song with Chris’s creativity.

In one of the interviews, Martin gave a teensy insight into the birth of the song. It was during the time they were recording a song called “Shiver.” The pitch-black sky had taken over the world, but it was dotted with dazzling and shining stars. When the band stepped out to take a little break, the star-studded sky seemed to inspire us to get better music out of the group.

Chris says that yellow doesn’t hold a significant meaning in the song. It is more of a feeling, and the emotions resonate perfectly with the song. He was motivated to play the tune for this song at that very instant, and the band further developed the song into a marvelous creation.

Yellow holds an exceptional space in the hearts of many people, and some people would even title them to be the best band ever solely based on this song.

But, with other famous bands like Green Day in the rock music scene, is it justified to state that Coldplay is the best rock band? After all, Boulevard of broken dreams by the rock band green day continues to win hearts to this date.

Several of the albums made it to the top charts in the UK, US, and Australia soon after they were released. The lead single “In my place” from the album “A Rush of Blood to the Head” was placed second on the UK singles chart, which was a triumphant achievement for the band.

2. Songs You Must Listen To!

Here’s the list of the preeminent Coldplay songs, which will strengthen your faith in the band, answering your question – Is Coldplay the best band ever!

The best way to answer the question, ‘is Coldplay the best band ever?’ is to tell our readers the unique story about one of the most loved Coldplay songs. We are talking about the song named “a sky full of stars.” The name is delicate and gracious, and the song is instantly going to send a rush of emotions down your spine.

The most beautiful part about the song is the way it combines different elements of music and gives the listeners a perspective about different genres, all packed in one. Katy Perry inspired a sky full of stars, and it also used some quirky EDM. This is the prime reason the final love song sounds very fulfilling and promising.

The versatility and emotional comfort of the songs are one of the other reasons why the band has a special place in our hearts. For instance, if you listen to the song “Fix You” from the album X&Y, you can relate to it at a very personal level. The line “lights will guide you home” gives hope to the grieving atmosphere of the song.

Contents
Is Coldplay the Best Band Ever? Yellow!1. Top Charts and More!2. Songs You Must Listen To!3. The Unique Factor4. Live Music!5. Coldplay’s Live Shows6. The Artwork Perspective!7. The Dark Side8. The Last Perspective!

It sheds light on the wounds of losing someone you truly love with all loyalty, but the song also fixes your soul. Heartbreaks can be very tragic to deal with, but there is nothing like a soulful melody and comforting lyrics from your favorite band to heal the hurt.

Also, read our article: Top 10 Must-Hear Songs Of All Time To Cheer Your Mood.

The scenes of energy and enthusiasm of the band, and the audience, fuel the viewers with a lot of zeal and zest even if it is viewed later. There is nothing like the feel of live rock, especially from such talented rock stars. What else do you even need to prove to the question is Coldplay the best band ever?

Here’s the link to the live performance of “Paradise” from the Paralympics Games Closing Ceremony in 2012. The video is so beautiful, and it will gain your admiration in no time. After all, the feel of live music creates a lasting impact on one’s mind. The aroma of sweat and cheer of the crowd fills up your ears with the entertainment of harmony and happiness.

Coldplay explores different forms of rock, such as alternative rock and pop rock. But they have a lot of elements of pop music in their songs as well. X&Y can be considered to belong to space rock but not the band in general.

If you are new to the rock scene and you wish to check out more bands like Coldplay, you can start by listening to bands like Kings of Leon and Led Zeppelin. Norwegian wood by The Beatles is a must on your playlist to make you fall in love with the rock sound instantly.

One of the other reasons why we love the band is not just popular music or hit singles. It has more to do with the way they pump up the audience. Don’t you believe us? Check out Coldplay’s FULL Pepsi Super Bowl 50 Halftime Show feat. Beyoncé & Bruno Mars are on the link here! You will love the vigor of the band.

I think one of the other components we often ignore is the artwork for the album cover. The album covers of Coldplay are exquisite, and the message they cover is very intriguing. For instance, let us take the protection of the album X&Y; Mark Tappin and Simon Gofton created it.

The cover comprises colors and blocks, but the fascinating thing to note is that it was a representation of the Baudot Code. It was used in telegraph communication, and the message was in the form of zeros and ones.

While the band is glamorous for popular music, they have also produced some bizarre tracks that aren’t very famous but worth listening to for sure. Calling this sphere, the dark side doesn’t imply that it is something negative; it is just to say that there exists a domain of this music that isn’t explored thoroughly. So, is Coldplay the best band ever because it has so much to offer and you cannot cover it all at once?

Rolling Stone is an esteemed music magazine, and it published an article comprised of twelve songs by Coldplay, which aren’t very popular. Check out the article here!

To summarize it all, every brand has a different journey and style of music. But Coldplay continues to dominate a higher rank in our hearts because of the relatable music and the calmness it provides to our minds. The complexity of the music is just a criterion to judge a band, but the right thing that matters is how well the strings of your heart are bonded.

Is Coldplay the best band ever, according to you? Let us know what you feel in the comment section below!