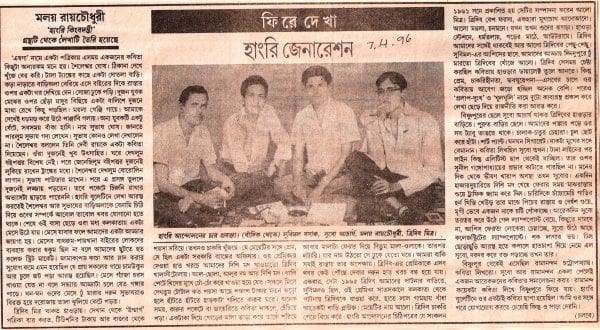 Scientists at their research lab were contemplating their novel project of sending a man to the moon.

They found their best person in the “common man” who could “survive without water, food, light, air, or shelter”.

Nothing captured the decadence and depravity of the previous century better than the lethal pen of R.K. Laxman. His caricatures portrayed the essence of a generation suffering vices, vices political in nature and socially corrosive in its magnitude. The civil unrest embodied it, Bollywood films epitomised it. Indeed, come to think of it, the 60s, 70s and 80s, lurking below the surface of silenced memories is seething turbulence of political will gone wrong, economic collapse and a “hungry tide” washing over…

Born of these “sore times” was the “Hungry Generation”, a clique of avant-garde poets based in West Bengal yet spreading across the latitude of the entire nation, to the further corners of Italy, France, and Germany. While “Avant-garde” is what they are labelled as, reading about them made me feel they were much more than controversial bards experimenting with the verses. They were the face of the “hungry”; the displaced, the wounded, the tongawalla riding in anguish through the city streets, the low-paid labourer slurring colourful slangs in an urban ghetto, the migrants cramped breathless in the refugee camps, any picture of destitution your mind could conjure. In Hindi, it was translated as “Bhookhi Peedhi”. In Bangla, it was called “Kkhudito projonmo”, the initial name of the movement.

There isn’t any other way out for poetry except suicide.”

…wrote the Hungryalist Malay Choudhury in his most famous poem, “Stark Electric Jesus”, a piece of writing that landed him straight inside the prison. The Hungryalist agenda was clear that it had to be “anti-establishment”. Anything that had to do with the law, the State, with conformity, with the order, compliance, the middle-class, the value-structure, was overturned, even if they remotely reeked of the bourgeoisie. But they did not pretend to be the ideologues of Marxism, and they were anti-Marxists. Marxists quite ironically were then holding the reins of power and running the State, which they hoped to demolish. Their literary manifesto was made of turbulent goals that featured the essence of “protestor” and “raw commoner’s culture”. Thus, their verses ran straight into depths of obscenity, scathing the high-brow elites still basking in the glories of the 19th Century Madhusudan and, of course, Tagore.

The voice, trampled by societal make-up and hushed by the roaring trams and city traffic, was the Hungryalist instrument. Thus many lower-caste writers, who would otherwise have never been allowed into the literary pantheon, were given space. It accorded them the respectability of a writer, never mind if ushered in a career of death and chaos. But the Hungryalists had a great penchant for turbulence, a pedantic one at that. After stirring disturbance in the literary world, they executed practical jokes by sending masquerades of jokers, drags and caricatures of mythical characters to politicians, erudite writers, bureaucrats and everyone else playing party to the oppressive power structure. Inside the gift was a letter in which would be written, “Please remove your masques”! Their audacity astonished the bourgeois sensibilities, rudely, exasperatingly.

Mere anarchy is loosed upon the world,”

Come to think of the 60s, and my mind is infiltrated with images of unrest and more unrest. It was in the time thereafter that the Naxal menace sprang off with great ideological underpinnings. The country was filled with a restless tide stretching across the length and breadth, materialising over the multitude of riots and state-sponsored killings. They were most importantly angry that the dream ushered by independence was now broken. But the dissonance was everywhere…

The 60s was the time of a great social revolution. British prudery was greeted with the sexual revolution that at once drove the sanity of a traditional family out of the vogue. Hippie communities fringed the urban sidewalks and LSD perforated through a generation of people. “Stark Electric Jesus” resonated with many people across nationalities and identities that it was translated into Spanish, Italian, French and several other languages. Hunger was a primal problem. What’s common to all of them is the utter suffocation engulfing so many people. The dissatisfaction was growing, and structures were dismantling in a sea of uncertainty. Whereas the Hippie communes dreamt of building up from the ruins….the Hungryalists were incorrigible mourners spitting venom over dreams lost, the helplessness! And yet…all of them failed to remain sustainable.

The Hungryalist poets continued to circulate their stinging verses across streets and colleges. As its popularity spread to other regions, the State, a Marxist one, coerced a crack-down on their project. Many writers were arrested. Malay Roy Choudhury was prosecuted for his verses. Some writers deflected and even notified against their fellow Hungryalists. They who started with an unwavering passion lost out on so much. Eventually, the movement died, yet, the pen kept writing and protesting. Even today, the literary circle boasts of Malay Choudhury and several other revolutionaries like him who continue to stir the ethers with their pens.