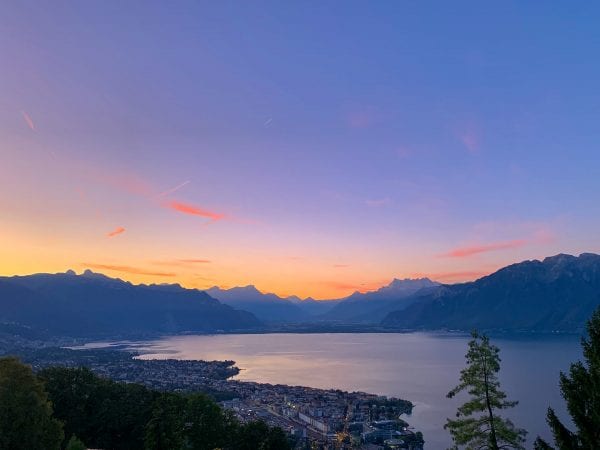 Lake Geneva is one paradise looking place. But did you know these 25 amazing facts about Lake Geneva?

Lake Geneva is one beautiful deep lake that spreads its heavenly boundaries from Switzerland to France. It is one of the largest lakes present in Western Europe.

With mountains around this blue lake, the beautiful castles and landscapes complement the whole scene. Yes, the lake is exceptionally photogenic and peaceful, but there’s a lot more to know about Lake Geneva, as it has some cool and interesting facts associated with it. 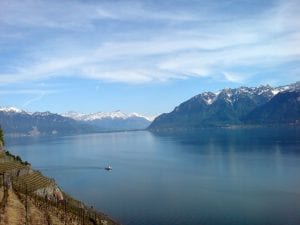 Lake Geneva is the creation of mother nature, and human has nothing to do with this wonder apart from being an admirer and care-taker. This natural wonder has many amazing geographical facts, so let’s explore them one by one!

1. Lake Geneva takes up an area of 7900 square kilometers

Lake Geneva is spread in a vast area of around 7,900 square kilometers; no wonder why it is one of the largest lakes of Western Europe. Its length is approximately 73 km, and the width is 14 km at the maximum gap.

2. The lake is divided between Switzerland and France

This Lake is so large that it has its 59% presence in Switzerland and the rest 41% lies in France. In the whole European continent, it proudly stands at the 23rd position in its size but is most extensive in the France and Switzerland provinces.

3. It is made of three glaciers

The lake is made from the melted glacier and hence known as one of the largest glacial lakes. It has been formed by three glaciers and is known by different names based on its features; Haut or upper lake, Grand or large lake the deepest point lies in this section, and Petit or small lake because it is narrower and less deep.

4. It has been explored by four submarines

The average depth of the lake is around 154 meters, and the deepest point here has 310 meters of depth. The depth is quite thrilling and mind-blowing. But the lake Geneva has a lot more to offer than tourism and boat rides.

The depth of the lake has attracted and been explored by 4 submarines.

5. 27 towns and cities surround the lake

There are more than 27 small towns and cities located in and around this lake, giving you a bundle of opportunity for a lake view accommodation and stay. In addition to this, Geneva is the first town where the speed of the sound was tested. 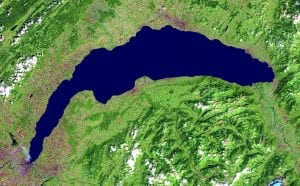 6. When viewed from above, it looks like a shark

The shape of the lake from the top or when viewed from the satellite is similar to the crescent moon or a shark. Its unique appearance is something that looks amazing with green surroundings and a blue shark-shaped lake. It’s the only lake shaped in the crescent form in the world.

7. It once faced a tsunami!

It’s a surprising fact that Lake Geneva has also witnessed a tsunami. As amazing as it sounds, but it is true, a disaster in the ocean is an accepted fact, but a tsunami in a lake is something that doesn’t happen every day.

The tsunami witnessed in the lake occurred around the Bronze Age, and after that five more times, it has happened, with waves of the lake extending beyond 13 feet of height.

8. Lake Geneva has six islands in it

The rivers which have contributed to the formation of the lake are the Rhone and other small tributaries like Dranse, the Venoge, and the Aubonne. Also, the lake has six islands located on it, and one of the islands has Chateau de Chillon, the renowned castle, and it is open for public visiting.

9. There is a vineyard on the shore of the lake

The lake is surrounded by mountains as Chablais Alps is present on the southern shore of the lake, and the western Bernese Alps are present on the eastern side. Some other snowy mountains like Grand Combin and Mont Blanc are slightly visible from different locations of the lake. 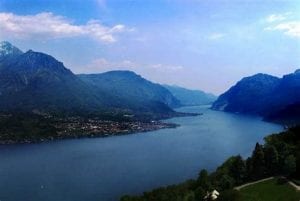 A single place can be known by different names, there’s no doubt to that, but this lake has witnessed the name change centuries after centuries. After a good interval of time, as the rulers changed, they changed the name of the lake as per their convenience.

11. The first name given to the lake was ‘Lacus Lemannus.’

Well, Lake Geneva is known by several other names.  And for the fun fact, its name has seen several changes after a few centuries. The first-ever name given to Lake Geneva was ‘Lacus Lemannus, ‘ which means a Port’s Lake in Ancient greek.

Later in the 4th century, it became Lacus Lausonius meaning the Lake District. After the 16th century, the Lake finally got its name from the city geneva, and people called it Lac de Geneva. The French still call it as Lac Leman or just Leman.

13. There is another Lake Geneva in the US.

Lake Geneva is located partly in Switzerland and France, derive its name from the city, canton, and community Geneva. And there’s another Lake Geneva under big foot beach park present in the United States. Yes, Lake Geneva of Switzerland is only and top-rated tourist attraction in the world. 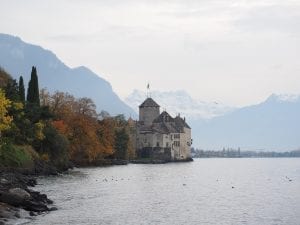 As outstanding as the lake is in its appearance, so is it’s silence and tranquility. The lake geneva has never returned anyone without any thoughts and hopes. People have experienced the silence and beauty of this place, derived some inspiration, and created a masterpiece that is known around the world.

The Lake Geneva area has been an inspiration to a lot of artists from around the world. It is said that British poets Lord George, Gordon Byron, and Percy Bysshe Shelley visited Lake Geneva to explore a castle named Château de Chillon that lies on the bank of the lake.

The views and story of a prisoner who was captivated in the castle inspired them so much that they ended up writing the infamous The Prisoner of Chillon’s poem and several other poems and sonnets.

The lake and mainly the Château de Chillon, which is one fantastic looking small castle, inspired the makers of the Little Mermaid movie, who featured the castle in their film as well.

16. It can be called the birthplace of Frankenstein

Percy Shelly, who spent a few days in the city of Geneva, wrote some amazing horror stories here, and one of her greatest works, known as Frankenstein, was produced here.

17. ‘Smoke on the Water’ was inspired by accident near the lake

This lake has been an inspiration behind the greatest’s top guitar tracks in the world. An English Band known as Deep Purple drove inspiration from a tragic incident that happened with them near the lake. A casino in Montreux, where the band had to record an album, caught fire, and smoke was seen all over the lake.

Hence, they made a song with the title’ Smoke on the Water,’ which went on to become one of the greatest hits. Today it stands at number 12 position in the 100 greatest guitar tracks of all time; do try to check and listen to this fantastic track. 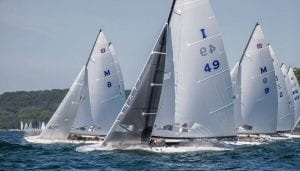 Lake Geneva has a vast surface area, and this large water body is present in the heart of the cities, which encourages water sports and lots of adventure. But not only just water sports are popular among the tourists; Lake Geneva offers an excellent platform for artists and musicians, and hence lots of musical events are organized in and around the lake.

18. The Lake is the venue for a world-famous rowing competition

A water sports tournament named Tour Du Lac, which is a rowing competition, is organized here, in which rowers from around the world participate in a 160 km long race. Many swimming competitions are arranged in the lake with different lengths ranging from 125 meters to 13 km.

Water sports like Yacht racing, kayaking, canoeing, fishing, etc. are a few popular sports practiced by the tourists of the Geneva city. The high-performance catamarans are developed especially for the lake. In matters of fishing, the lake houses over 20 indigenous species of fishes, and a few more were introduced in the 19th century.

Some leisure time sports that are popular around the lake are sailing, windsurfing, boating, rowing, scuba diving, and swimming, because the temperature of the lake remains mild and tolerable. 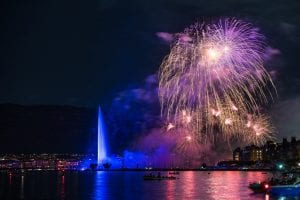 20. The lake hosts some of the biggest music festivals

In the musical events, the Lake witnesses some major and popular music festivals and that too from diverse genres of music. Attend the Montreux Jazz Festival; this musical festival is the second most popular and largest event organized near Lake Geneva.

This festival was started in 1967, and since then, every year, it has entertained its guests by presenting some finest jazz music.

For not disappointing other types of genres, you can witness almost everything here. From Hip-hop, pop, Rock and Blues, Heavy metal, Classical music to even trance, you see, there’s a lot more to Geneva.

The music festivals are so popular that it attracts big celebrities and fans from around the world, and it is estimated that over 2 million people visit this top attraction every year. 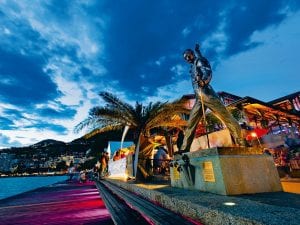 The beauty of Geneva is something that is known around the world, and hence it has not stopped world-famous celebrities from having a fantastic experience here near Lake Geneva and the city itself.

21. Many celebrities join the festivals

22. Many famous personalities have stayed here

Charlie Chaplin spent his last few days in the beautiful city of Geneva. Famous actors like James Mason, Richard Burton, and even Audrey Hepburn have lived in the villages located on the side of the lake.

Queen, the most famous band of its time had recording studios as well as dwellings here. A statue of Freddie Mercury has been installed near the shore of the lake. 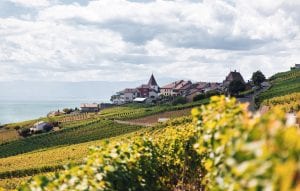 Geneva is one dream place, bucket-list-worthy or a must-visit city to go before you die; call it what you want, but mostly this beautiful city is described like this. And it’s a fact, this beautiful city located in Switzerland is among the top five places in the world in terms of tourism.

This city of Geneva, which is the second-largest city in Switzerland, has won the World Travel Awards title of “the Best European City for Weekend Tours’; and it is said that it is the Oscar award of the tourism industry.

Do not miss out an opportunity to tour this award-winning city.

24. It is a hub of International Affairs

Geneva is the center of some major international affairs and organizations, like the Red cross and Raëlian Movement, which is an organization that believes in the alien civilizations and studies them, yes, surprise!

Significant historical events like the formation of Geneva conventions, which are the regulations and rules related to the Prisoners of War issues, have been addressed here. It is also known as the birthplace of the internet.

25. Why you should love Geneva!

Free public transportation, lively and cheerful people of the city, rich history, major international organizations, and beautiful locations are the reasons why millions of people visit this city every year.

These were a few amazing facts about Lake Geneva. You can read more about Geneva here! For every kind of person, the city has something for their amusement, from nature’s wonder to Geneva Lake Museum.

Accommodation and sightseeing is not a problem in the city as it is the queen of tourism. May you like walking on the lakeshore path and enjoying the beauty of the Grand Geneva or the hustle-bustle of the city and its glorious people, the city has everything for everyone.

If you ever get the opportunity of visiting Switzerland, don’t miss the chance to see this marvelous lake and have a pleasant experience here while enjoying the sports and activities.

This was an article on ‘Lake Geneva: 25 Interesting Facts!’ if you have something to add, please feel free to share your thoughts with us!