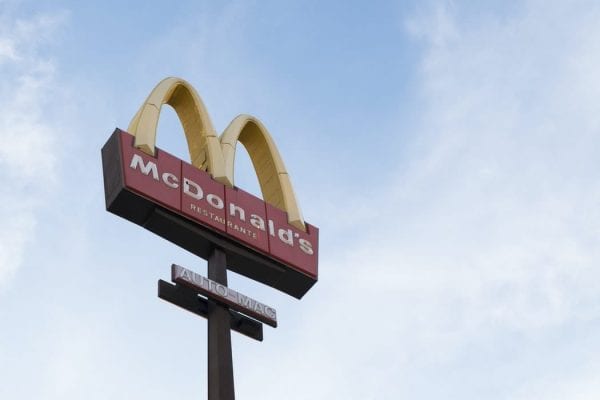 Red & Yellow. A colour scheme that brings forth fond memories of hamburgers and fries; an indispensable part of our lives made so by a friendly little chain – McDonald’s. Started by two brothers, Richard and Maurice McDonald in 1940 & later acquired by businessman Ray Kroc, McDonald’s has painted the world red & yellow & how.

However, even though it is the behemoth it is, McDonald’s is not one without some crazy facts up its sleeve. To find out some of the craziest McDonald’s facts, read on:

The earliest ancestor of the McDonald’s we know today was a small food stand called ‘The Airdrome’. The McDonald’s family moved to California in the late 1930s where they struggled to make ends meet as the brothers Richard & Maurice McDonald (fondly known as Dick & Mac) worked as handymen for Motion-Pictures studios. They opened a movie theatre business that did not do well either. However, they noticed nearby hot dog stands always doing good business.

So in 1937, Patrick McDonald, along with Dick & Mac opened The Airdrome (named as such due to its proximity to the flying field in Monrovia), a food stand which started off with just hot dogs but grew to sell hamburgers for 10 cents and all-you-can-drink orange juice for 5 cents. By 1940, good business allowed Dick & Mac to move the operation to San Bernardino and rechristen it ‘McDonald’s Bar-B-Que’.

Before the eponymous Ronald McDonald arrived on the mascot scene, McDonald’s welcomed its patrons differently. The first mascot was Speedee; a pudgy little man with a hamburger shaped head and chef’s clothing. The name came from the delivery system developed by the two founding McDonald brothers called the ‘Speedee delivery system’, which made possible the idea of ‘fast food’ today. The mascot doubled up as a logo for the restaurants and its earlier branches with various signs saying ‘Custom Built Hamburgers’, ‘Coast to Coast’ and ‘I’m Speedee’.

When Ray Kroc decided to get rid of Speedee in favour of something more crowd-pulling, Fred Turner (then head of McDonald’s corporation) sketched the first draft of what would go on to become the universally recognized golden arches of McDonald’s.

After purchasing the chain, Ray Kroc put in strict codes and measures for franchisees which meant that all of McDonald’s facades were to be regularly updated to maintain their signature uniformity. However, one old branch has managed to retain its former glory. The McDonald’s at 10207 Lakewood Boulevard at Florence Avenue in Downey, California is the oldest surviving McDonald’s today. It was the third ever opened (in 1953) and second one franchised by the illustrious McDonald brothers.

The fact that it was licensed by the McDonalds brothers before the arrival of Ray Kroc meant they did not have to comply with Kroc’s codes. Today, the building still retains its original structure with two yellow parabolas on either ends and the sign out front featuring Speedee, the original mascot.

When you think McDonald’s, it’s hard to imagine anything but hamburgers & fries. Ah! Good ol’ American fast food. But there was a time when the name McDonald’s also meant something else; tacos and burritos! One of the crazier McDonald’s facts many may not know today is McDonald’s owned majority shares in Chipotle when it was starting out. Steve Ells founded Chipotle Mexican Grill in 1993 in Denver, Colorado.

As the story goes, he came in touch with a Mcdonald’s business manager through a fellow board member. He brought Ells to a board meeting where Ells brought in tacos & burritos and the McDonald’s board ended up lovin’ it!

Over the next years, McDonald’s invested heavily in Chipotle allowing it to expand in 500 new locations across the country. At its peak, the investment was almost 90%. However, the difference in the direction the two companies wanted to take and other factors led to McDonald’s divesting its shares from Chipotle completely in 2006. Now you know who to thank for the Chipotle around the corner!

While McDonald’s has long been a popular venue for kids’ birthday parties, that wasn’t enough for fans of the popular fast-food restaurant. In 2011, McDonald’s Hong Kong started offering wedding services to its patrons! Starting much below the cost of traditional wedding packages; for as little as US$500, you can get a full 2-hour arrangement including an MC, catering, McDonald’s themed gifts for guests, helium balloon wedding rings and an apple pie tiered wedding cake!

And that’s not all. Customers have the choice between 4 extensive wedding packages. McDonald’s spokesperson Jessica Lee explained why McDonald’s became the hot choice for couples, “…many customers tell us that McDonald’s is where they first started dating…McDonald’s is where their love stories grew.” So if you’re a sucker for Mickey D and these crazy McDonald’s facts, the yellow arches might just be a good place to say ‘I do’.

McDonald’s started expanding rapidly under the leadership of Ray Kroc. In 1959, 68 new locations were opened and one of them was Lou Groen’s in Monfort Heights, Ohio. Business was bad and Groen was especially struggling with the fact that the area was 87% catholic, which meant that they abstained from meat on Fridays.

He was struggling to make ends meet for his family. That’s when he noticed a nearby restaurant (of the Big Boy chain) was selling fish sandwiches. He got to work and developed a simple fish burger with two slices of cheese and brought his idea to Ray Kroc.

At the time, Ray was coming up with a meatless alternative of his own, the ‘Hula Burger’ which was a piece of grilled pineapple and cheese in a burger. They settled on a sell-off. Come Good Friday 1962, Filet O Fish sold 350 units and Hula Burger, a measly 6. The rest, as they say, is history.

While Ray Kroc was building his fast food empire over the United States, another business tycoon was hard at work. Walt Disney was riding high on the success of his early motion pictures and in the year 1954, unveiled his big, bold plans for Disneyland. Around the same time, Kroc had opened his first McDonalds in Des Plaines, Illinois. After he bought out the McDonalds brothers, he wrote to Walt (whom he had also met while serving as a Red Cross Ambulance Driver during WWI) saying “I have very recently taken over the national franchise of the McDonald’s system. I would like to inquire if there may be an opportunity for a McDonald’s in your Disney Development.”

Legend has it, Disney was interested buying but wanted Kroc to raise the prices for the park. Kroc refused to do so to his patrons and the deal fell through. How much truth there is to this legend remains a mystery, but this parallel between the two biggest businessmen of all time definitely makes this little anecdote one of the unlikeliest McDonald’s facts.

Limited edition toys from Happy Meals sell for hundreds of dollars as collectibles and you can imagine why. The joy of going to McDonald’s as a kid was incomplete without the magic Happy Meals. The idea for the Happy Meal came from a franchisee, Yolanda Fernández de Cofiño in Guatemala in the form of the ‘Menu Ronald’ which included a burger, small fries and sundae for the kids. It reached the McDonald’s management and they decided to add a small toy to the mix. It was a hit.

It started out with McDonald’s themed toys like the “McDoodler” stencil or a “McWrist” wallet but they eventually partnered with giants like Disney to sell movie themed merchandise. With around 1.5 billion toys worldwide, the Happy Meal shows no signs of slowing down. I don’t know about you, but for me, this makes for one of the cutest McDonald’s facts!

If eating at McDonald’s for free is your dream, then boy, do I have one of the most enticing McDonald’s facts for you. If there’s anything better than the McDonald’s burgers themselves, it’s a golden ticket that gets you these burgers for free! The card has become somewhat of an urban legend over the years with only a very limited few (the likes of Warren Buffet & Bill Gates) having access to it. Franchisees have been known to hand out these cards too, although selectively.

But if connections are not your thing, McDonald’s has also been known to organize sweepstakes for one or two lucky winners. So hang out enough in your local McDonald’s and who knows? You might just get to share the McClub club with Buffet and Gates.

Purchasing power parity (PPP) is a macroeconomic measure used to compare income levels between various countries by comparing the cost of a standard good across them. As an semi-humorous informal measure of PPP, The Big Mac Index was invented by The Economist in 1986 in an effort to make the theory “a bit more digestible”.

For the Big Mac index, the good compared is the Big Mac, because it remains more or less standard across countries. This measure has become a popular tool for price comparison, proving yet again that McDonald’s facts have a little bit for everybody, even the economists.

With fast food coming under the scanner for its ill health effects, all major chains are taking a hit. McDonald’s too, hasn’t been spared. The chain is struggling with low sales, lawsuits and sustainable practices as the emphasis on healthy eating mounts. Whether this little red & yellow chain from California will change itself to survive, or whether it will collapse under its own weight remains to be seen.

To learn more about McDonald’s and its history, check out “The Founder” on Netflix!