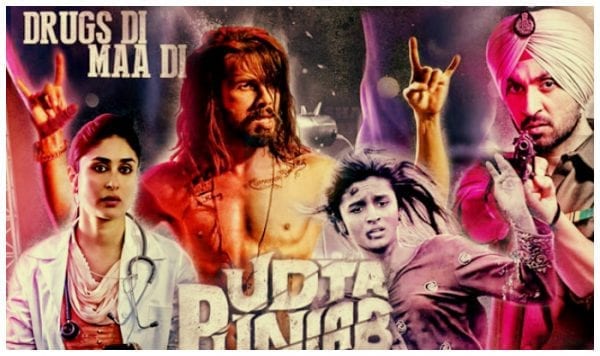 Udta Punjab has attracted a lot of controversy over the past couple of weeks. It finally released this Friday and had successfully impressed one and all. It has received good rankings from critics, and the public seems to love and praise the movie which shows the current scenario of the drug menace being faced in the state of Punjab. The movie most definitely did not fail to impress. “Abhishek Chaubey’s Udta Punjab is littered with standout scenes, but none matches the sledgehammer impact of the climax.
Chaubey tells his powerful, sinewy story with great dramatic flair, but he never ventures too far away from the harsh reality of the nexus between the drug kingpins and the state’s politicians.” wrote NDTV whereas Times Of India commented, “UDTA PUNJAB GIVES YOU A ‘SUBSTANTIAL’ HIGH.”

The release of this film was however surrounded by controversies from the very start. It started when the Central Board of Film Certification (CBFC) suggested that the makers make a total of 89 cuts in the movie and also remove the title of “Punjab” from the film title. This action garnered a lot of negative comments and angered not only the big personalities of the film industry but the common people as well. This act of the CBFC was seen as a major hindrance to the freedom of expression given to the Indian citizens. Anurag Kashyap, who is one of the producers of the film, stood up against the censor board and urged the nation to stand with him for the freedom of expression. He went on to blame CBFC chairperson, Pankaj Nihalani and called him a “dictator.” Kashyap was supported by many like Mukesh Bhatt, Karan Johar as well as many journalists like Rajdeep Sardesai. The Mumbai High Court finally agreed to Kashyap’s pleas and the film was slated to release on the 17th of June with only one cut. However, matters took a turn for the worst when the movie was illegally made available to download just two days before the big release.

The movie version that was released online had a run time of 2 hours and 20 minutes and featured scenes that were objected to by the CBFC. The movie was taken down soon after for “copyright complaints.” Stars like Shahid Kapoor and Karan Johar took to Twitter to request the public to watch the movie in theaters and not support the piracy of film. The culprit behind the early release has still not been found.

Anurag Kashyap wrote a long post for the public on his Facebook page soon after the incident. “I have never downloaded a film on torrent; I don’t know how to. Yes occasionally I have seen downloaded films borrowed from friends and found a way to pay for them later, by buying them on DVD or BluRay, and when I say this, I also say that no one can stop your right to download a film. This time its a different fight, its a fight against censorship and if you are that audience that always downloads a film, then I won’t ask you not to do that, please do, but wait till Saturday, which is the day you would normally download a film. Piracy happens because of lack of access and in a world of free internet, I do not have a problem with it. My problem is that this time it’s a case of vested interests trying to demoralize people from fighting for their rights. So all downloaders of Udta Punjab, i urge, wait till Saturday till you decide not to pay for the film, don’t download and share, curb the curiosity for two more days. Thank you for reading this” he wrote. Nevertheless, all turned out fine, and the film starring Shahid Kapoor, Alia Bhatt, Kareena Kapoor and Diljit Dosanjh earned 10.05 crore on the opening day itself. The movie has not only earned an impressive box office collection but also put up a bitter fight against the censor board and won.