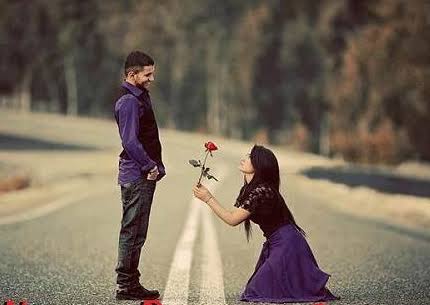 Wondering how to propose to a guy? Or thinking why girls proposing to boys isn’t something you normally see? Sure, girls proposing to boys doesn’t happen often, but isn’t society to blame for it a bit? No matter where in the world you are from, it kind of looks strange if a girl proposes to a boy – and that’s what we are going to talk about today.

Falling in love is the most wonderful feeling. We all know that.  However, you need to be with somebody who loves you at the same time.  And most importantly, one of you needs to propose the other at some point in time!

It doesn’t matter whether you are a guy or a girl. Please don’t sit back and expect the other person to know it through telepathy. Break the stereotypical image of girls being the passive recipient. Here are some reasons why girls hold back. If you are one of them, why not just tell the guy that you do love him? So, when can a girl propose to a guy?

11. More women prefer to be asked out compared to men

Studies and statistics show that women preferred to be asked out in comparison to men. Ask your girlfriend, and she probably would like a guy to ask her out first, too. The same logic applies to proposing as well. Come on, who does not like to be swept off their feet with an extravagant proposal by her guy? But well, you know that you too can take the initiative, right? Yes, a girl can propose to a boy.

Right from the ancient times of courtship, it was a man’s duty to ask a woman for her acceptance. Being an Indian, a woman is often taught to be docile and sit back. You might want to let that guy you love know how you feel about him and your relationship with changing times. No, you won’t be an outcast by doing that. If you are wondering how to propose to a guy, don’t sit back. Take the initiative.

If the girl takes the first step to ask a man out by chance, she is judged by the conservative society. Don’t worry about it. If someone you love tells something to you, explain it to them. Otherwise, remember – if you’re right, you shouldn’t step back.  Love knows no bounds.

Many of you would think that it’s desperate for a girl to propose to a guy. But not the other way round. A girl chases the love of her life, and it may portray a very desperate and needy image of her. If a guy does the same thing, he is considered spontaneous, sweet or romantic. Somewhere, the blame starts with everyone accepting and assenting to that image.

This is a patriarchal society, and a girl proposing to a guy can portray her as easily approachable. Despite a girl liking the guy, she has to keep it within herself to avoid getting tagged as what many of us call a “loose woman” or one with no integrity. It is mainly due to the fear of being judged that she stays within society’s defined limits.

Guys love girls who can tell what they feel and don’t hold back. If they don’t, you probably wouldn’t be looking for someone like that anyway. Many girls do not take the initiative in proposing primarily because of the fear of rejection.  It’s okay. Rejection is part of life. True, it is quite difficult to overcome the pain and grief that follows rejection. But wouldn’t not knowing whether that guy liked you be worse?

Thanks to Nicholas Sparks books and countless Bollywood films, people have unrealistic romantic expectations of things that can never happen in real life. If you love that guy, why not accept his imperfections?

04. Waiting for the right guy

We have got to accept this girl, and Prince Charming DOES NOT exist. Prince Charming isn’t God, and he is bound to have imperfections. We keep waiting for the right man, and soon it is too late to understand there is no such thing as the right guy and the right moment.

03. Pointing fingers at you

Every time you fight, he has the one thing to say that you hate the most. He blames you for proposing to him in the first place if you couldn’t handle a petty fight. This is one of the most annoying reasons.

Girls always want to feel special. If a guy proposes to her, she feels like she is on top of the world, special and all the more romantic. I mean, who doesn’t like the extravagant surprise proposal on top of the Eiffel tower.

Finally, there is that fear of being worthy enough for the man. There is a popular saying, ” A girl thinks she is never good enough for the guy she loves”. Take pride in who you are; go ahead and speak your heart out. True love has no parameters that need to be fulfilled.

It is believed to be an untold rule that a woman’s role is to accept the proposal or reject it but not to make one.  It might have originated from the stereotypical image of men being the providers both physically and financially.  At the end of the day, someone, be it a guy or a girl, has to take the initiative and express – after all, all that matters is love. ” All is fair in love and war.”

5 thoughts on “Girls Do Not Propose Guys: 11 Big Reasons Why”