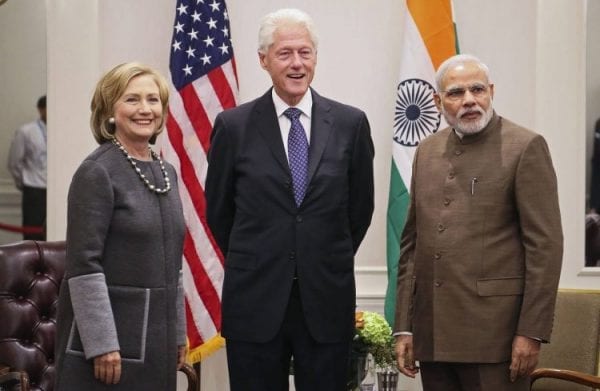 Hillary Clinton is the first woman to run the presidential elections with intense support from citizens. She is one of the most liked out of all the women of the U.S. in this century. Clinton is famous for her eloquence, political leadership and strategies, and books she has written.

The former secretary of state Hillary Clinton is the ideal of thousands of young women. All the world is dreaming of becoming like her one day. Also, Clinton is the wife of former U.S. president, Bill Clinton, who served as president from 1993-2001.

Her speeches are quite inspirational and encouraging that students use her as their role model. Fans also put her name in their college applications. Hillary is the perfect fit of a 21st-century feminist woman who believes in Equality of opportunity to all.

The events would’ve turned in favor of India and Indian students in the department of Higher studies and further education. Let’s see what Hillary Clinton’s take on Indian Students without any further delay is.

Education, without a doubt, plays an essential role in all aspects of one’s life, especially in the 21s century. The importance of higher education has rapidly increased in the last few decades.

People all around the world are becoming aware of it even in developing countries such as India. The government of all countries strives to set up higher education colleges, universities, and institutions for better opportunities.

The more, the higher education opportunities, the more choices students have to find their field. It provides students with better career and financial opportunities along with vast knowledge in their chosen field. Its relevance increases every passing day and assures in-depth expertise in the pursued subjects and areas.

Clinton, in the past few years, has served as a brilliant diplomat, eloquent public speaker, skilled lawyer, and writer. She was furnished as the 67th U.S. Secretary of State and First Lady of the United States.

Hillary Clinton was the first woman to be nominated for becoming president of the U.S. from the Democratic Party in 2016. Unfortunately, even after being the first woman to achieve a considerably popular vote, she lost to Republican candidate Donald Trump. (Clinton could be your feminist role model, I know she is one of mine along with Michelle Obama.)

Did You Know? Clinton was associated with the Republican Party before she became a member of the Democratic party. In 1964, as a Republican, she campaigned for Barry Goldwater. But in 1968, she shifted to the Democratic Party working for George McGovern and Jimmy Carter later.

The STEM in an acronym for Science, Technology, Engineering, and Mathematics. These are fields in which the Indian students are pursuing their higher studies in the U.S.

Clinton during her time of being the presidential candidate from the Democratic Party. She released an “Initiative on Technology and Innovation.” The young people of India will be the ones who will be benefitted most from such an initiative.

Not only this, but Clinton promised an automatic ‘Green Card Policy.’ For the students who complete and achieve a master’s degree or Ph.D. from a U.S. university. Experts in the fields of Immigration had predicted. That if Clinton comes through with her policy, then Indian students would be its biggest recipients.

Ms. Hillary Clinton’s take on Indian Students is part of an initiative to attract young talent from all around the world. Hillary aimed to take in the raw talent and turn them into sparkling diamonds. The experts argued that around eighty percent of students, especially Indian students. Will be in the STEM category second to the Chinese students.

Fun-Fact Box: Here you will find some lesser-known but fun-facts about Hillary Clinton. Being the first woman senate of New York ever. She had always been in the spotlight since her elevation in the political world.

A) Did you know that she won a Grammy Award in 1997 in the category? For the best-spoken audiobook of her own written book “Takes a Village”?

B) Even much lesser known fact is that Clinton. Is she was declared as one of the best 100 efficient and influential lawyers of the United States by the National Journal Law.

C) One of the fascinating fun-fact about Clinton is that she refused to appear in the popular Magzine Vogue. The reason being, “it would appear too feminine.”

D) We all might already know that Clinton graduated by Yale Law. As she becomes the first lady to hold a Post-Graduate degree. And to become a senator later.

RELATED: To find more lesser-known fun-facts about Hilliary Clinton and her personal, political and social life. Please click here to check if interested.

The proposal regarding the automatic ‘Green Card Policy’ for STEM graduates was in debate for a while now. It was even promised by Mitt Romney, a candidate from the Republican Party during his presidential campaign in 2012. The international students in the U.S. universities enter the F1 visas that could be employed under OPT (Optional Practical Training).

Clinton’s plan for Indian students was not only extending great higher education opportunities. Along with the ‘Green Card Policy’ to the STEM fields students. But she also undertook to inform and guide them. By warning them not to fall under the dubious and fraud offers by some institutions in the U.S.

Hillary planned to deepen the connection between the two largest democracies of the world, i.e., the U.S. and India. Through the improvement in the higher education system is a strategic partnership between the two countries. To further the goal of achieving global power in the sphere of education.

She delivered the first US-India High Education Summit at Georgetown University. Calling for a long-lasting relationship not only at the government level but also encouraging strong collaboration at the education level too.

Clinton promised that the U.S. government would be wholly devoted towards enhancing higher education and academic opportunities for the Indian students. However, Hilliary Clinton’s take on Indian students and policies about higher studies. It has been put under scanner by media as a propagandist agenda.

Now, there will be nothing wrong in arguing that if Clinton would’ve won the elections. It would have been in the advantage of international students studying in U.S. universities in the STEM category. The largest recipients of the proposed education policies of automatic green cards and others would have been the Indian students. Alongside promoting the Indian American Community.

Unfortunately, enough Hillary lost the 2016 presidential elections to no one else, but Donald Trump her opposition from the Republican Party. The friendly relations between the Clinton and Narendra Modi, the Indian Prime Minister. It would’ve been in favor of Indian-American students. Clinton would’ve followed the path set by former President Barack Obama along with his consultant, John Podesta.

Despite all the questioning and scrutinizing regarding Clinton’s favoritism towards India. Just due to her aim for creating better education opportunities in the world’s two largest democracies was just a means to an end. It doesn’t change the fact that it would have an extremely advantageous for Indian students desiring to pursue higher education in the U.S.

RELATED: Along with the US, Canada also provides a wide range of opportunities and scholarships offered to international students. A large number of Indian students can be found in Canada pursuing courses of their dreams and thriving in them.

So this was an article focused on ‘Hilary Clinton’s take on Indian Students.’ If you have more to add, please feel free to share your thoughts in the comment section below.

RELATED: Click here to check out how to pay for college.